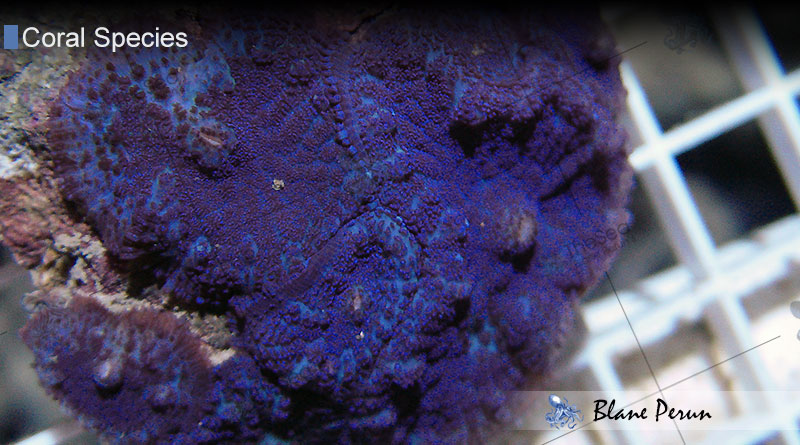 Discosoma, also known as mushroom corals or elephant-ear corals, is a genus with lots of sub-species most commonly found in the Indian Ocean and wide-spread in the Pacific region as well, mostly in places that get moderate water flow and filtered light. It is not a true coral, but a corallimorph, sharing certain features with anemones, such as the lack of skeleton secretion.

Discosoma derives its name from its disc-like appearance. The disc-shaped body is usually quite large, between 1” and 4” in diameter and it features a conical opening, the mouth, placed in the middle of their body. They can be found in many different color varieties – red, purple and blue being the most common. Most mushroom corals are one-colored, but there are striped and spotted varieties as well. Green specimens usually have fluorescent extension tips.
Mushroom corals live attached to large rocks that they adhere to with their feet, without being attached to a shared base, in a way similar to anemones that cling to their rocks. Some of the sub-species are solitary corals, while others are colonial species, with the individual corals joining into fairly large colonies that grow quickly and are able to conquer ground previously occupied by other species by secreting poisonous chemicals.

Mushroom corals feed through zooxanthellae, the plant cells that dwell inside the corals and have in a symbiotic relationship with them. They usually feed during the night, by extending a polyp from inside their skeleton, but some sub-species, such as Heliofungia actiniformis, extend their polyps during the day, too; therefore, they can be easily mistaken for other marine species such as anemones. They also filter the water around them to get access to the amount of nutrients they need, feeding on small, meaty particles that float in the water and on zooplanktons.
Mushroom corals reproduce very quickly if the conditions in their habitat are optimal and it is interesting to note that some species of the genus, such as Fungia repanda, are able to change sex and they do so several times during their life.
Like many other corals, discosoma corals have two proliferation methods. The colonies spread through asexual reproduction called division or sexually, by broadcasting a spawn. When the proliferate by means of division, a small part of the mother coral detaches to float in the water until it can settle on a rock suitable for starting a new colony. Sexual reproduction happens by eliminating a large quantity of eggs and sperm that combine and float to settle on rocks and develop into larvae.

Coral mushrooms are considered to be hardy and very aggressive. They can spread rapidly and overgrow other neighboring colonies of both stony and soft species of corals. However, despite their resilience and sturdiness, Discosoma corals are no different from other species and are also sensitive to environmental threats, such as changes in the temperature and the chemical composition of the water in their habitat, this being especially true for solitary sub-species that lack the protection offered by the colony.