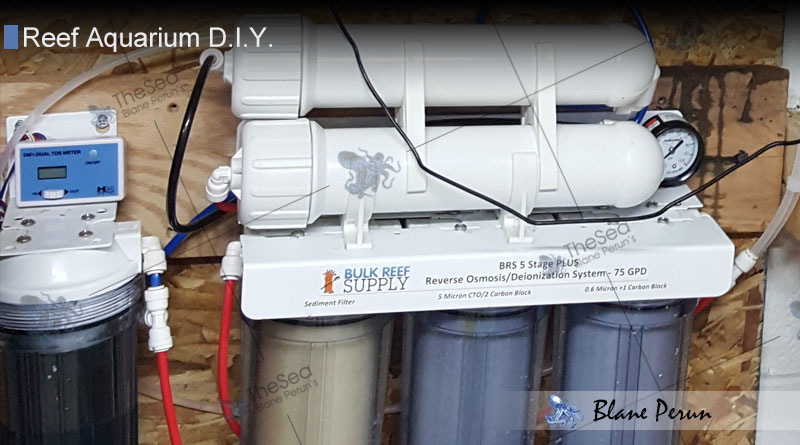 Remove the lid with the holes from the housing (female adapter glued onto the clear pvc). push the pipe through the middle hole until the elbow touched the lid. see figure 2

this is the intake.
Glue around the elbow and the hole. or if you would feel safer, put the epoxy puddy around the hole and smooch the elbow onto it. after this dries totally like a rock, you can puddy the inside around the pipe and hole if you feel the need.
Now, cut a two inch piece of pvc from the remaining pvc.
Glue the elbow hose barb onto one end of this pvc. see figure 2.
Slip the other end through the side hole in the lid and glue or puddy like you did for the intake.
If you didn’t already, unscrew the lid you just added this stuff to from the housing. teflon tape the lid again with the thick tape. set aside.
Fill the housing (clear pvc with the female adapters glued onto it. see finished diagram) with the sand until you get three inches below the female adapter on the top of the housing. set aside the housing.
Connect the tubing to both the barbs on the intake and outlet . see figure 4.

Connect the power head to the intake tubing ( the tubing connected to the ball valve, check valve, etc).
Fill a bucket up with water that the power head will fit into. this is temporary only until we have the filter together and rinsed out.
Put the power head in this bucket. now, grab the lid with the intake, etc attached to it (see figure 2) and position the intake stem in the middle of the housing resting it on top of the sand. (figure 3)

Turn the ball valve on low flow. then turn on the power filter. be sure the intake stem is pointing straight down the filter and watch to make sure you don’t get wet here.
When the water starts coming out of the intake pipe, start pushing down on the lid until you get the lid to touch the housing. this needs to be done fast so there is no water overflowing from the filter and thus sand coming out. when the lid reaches the housing, screw it in tightly so there are no leaks. the purpose for doing it this way is so no sand gets into the intake thus clogging it and preventing the filter from working.
When the filter is all together and intact, put new water in the bucket. before re-starting the power head and the sealed filter, you must be aware of something. when the filter starts, there will be a huge air pocket in the filter that causes the sand to rise to the surface. when you see the top of the sand go out of view, stop the power head and gently shake the filter. This will cause the air to rise and the sand to sink. keep doing this until all the air is out of the sand. then turn on the power head and let the filter run. adjust the flow with the ball valve so that the sand starts to churn just below the female adapter at the top. you want to be able to see the top of the sand churning. this would prevent a lot of sand coming out and too fast a flow for the bacteria to establish themselves. Some sand will come out. this is okay. we added a bit extra sand then is needed.
Continue to add fresh water to the bucket until the water runs clear. this is rinsing the dust, etc out of the sand. when all is clear, it is time to connect this filter to the tank.
Important :
you need to set the flow of the filter correctly so the sand does not come out and the bacteria can establish themselves.
the way to do this is tricky. it is best to have some test kits on hand for reference to make sure the flow is set right. you should have at least and ammonia and nitrite test kit. it is helpful to also have a nitrate test kit.
The sand should moderately churn two to 1 inch below the top female adapter. if you barely see the top of the sand churning, the flow is too high. you also do not want a massive storm inside the filter, this will not only cause the sand to come out , but render the filter ineffective. This filter is designed to run as a slow biological filter not a power filter. not a lot of flow is needed to run the filter properly.
Another way of determining if the filter flow is set right, when it is running, look at the sand in the middle of the filter and toward the bottom. this sand should be moving slowly downward, periodically stopping for 30 seconds or so and then moving on. The top of the sand that was just being churned, should move downward in a more faster flow until it reached the sand level i had just mentioned that has slow flow. If the sand is constantly moving downward without a calm time with no movement for 1/2 minute, then the flow is too high and the bacteria will not establish themselves enough to do their jobs. this is where the test kits are handy.
Once the filter is seeded properly or put into a well established tank and is ran for a few days ( it is best to add some established gravel in the filter when going to use on the tank) test the water. if you previously had levels showing of ammonia or nitrites, and no longer have readings, the filter flow is set properly. if however , you have readings still, then either the filter is not seeded or the flow is too high. If after being seeded and running for two weeks and you still have readings, then the flow is too high. The best way to set the flow properly is to run it in tank water that has ammonia and/or nitrite readings.
What I did to quickly seed my filter when I had new tank syndrome, I put a handful of gravel from an established tank in the first day. then the next day I tested the water and added another 1/2 handful of established gravel. I let the filter then run 3 days. I tested the water. there was no ammonia or nitrites but I did have some nitrates. which is part of the bio process. then One day after the filter was running for two weeks and keeping the water toxin free, i decided to increase the flow just a tad to churn the sand more. within a day, the nitrites were back. ammonia started to occur. so I lowered the flow again, the next day, the toxins were gone. with 5 ppms of nitrites, the fluid filter took 4 days total to set the reading 0. this was in a new central system that suffered from the classic new tank syndrome. a wet/dry filter was previously seeded but was not helping. I have not had these two readings go above 0 since the fluid filter was running on the system. i personally swear by the fluid filter. some people claim that the filter does not work like it’s reputation claims. i believe that these people who claim this, do not have the proper flow set on the filter.
I may be repeating myself.. but it is intentional. If the flow is not set properly, the filter will be ineffective. that is all :)