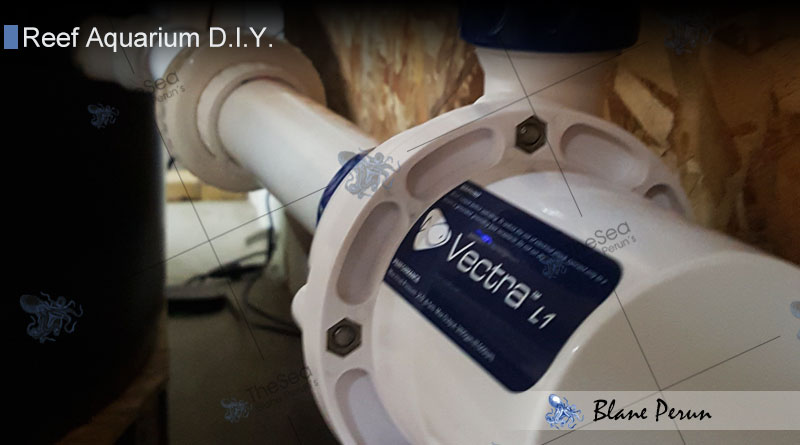 It A few months ago I heard about using a sprinkler rotor head for a water return device in my reef tank. At first it sounded strange but the more I thought about it the better it sounded. Why spend almost $150-200 on other devices when this one would work almost the same and at a fraction

of the cost. All of my experiences have been with the Orbit VoyagerII rotor head, so far they have been going good for about 9 months now and are still going strong. The pic’s aren’t the best, they were taken with a Sony video net cam and a capture card, soon I’ll try to take some regular pics and scan them, Still saving up for a digi cam. All questions can be sent to fishmon@freewwweb.com or I can sometimes be found on the IRC channel #reefs on Xnet as sky24 (I lurk allot so I don’t say much but I’m usually there).

This is what my completed assembly looks like. The rotor head is inverted and glued to an acrylic plate which also becomes the bracket for mounting it to the tank .

This is a front view of the tank with the rotor head installed and running. I now have three rotors running in the tank. and it has greatly dropped the back pressure on my return pump. The pump I am using is a Little Giant 4md.

Here are the four basic parts of acrylic that get glued together to make the bracket. The center piece of acrylic has two holes drilled in it and then tapped 1/4-20 so that the bracket can be clamped to the tank wall.

Here the first pieces of the bracket are being glued together.

Here is the rotor head, the spring has been removed from the rotor body and isn’t used.

This is what the completed assembly looks like when done. All pluming was done with 3/4 inch on the first rotor head but was later changed to 1/2 inch as you see in the picture. That’s all there is to it, it is a simple project. All acrylic gluing was with weld on 3 including gluing the sprinkler head to the acrylic.