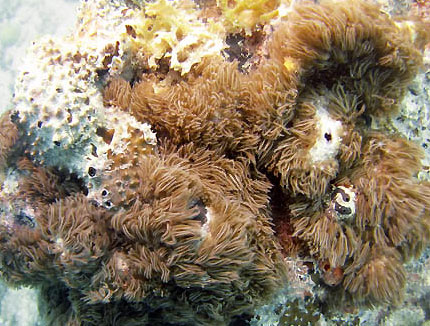 The encrusting gorgonian (Latin name brianreum asbestinum) is a native of both the Pacific and Atlantic Oceans, but are abundant in the coral reefs of the Western Atlantic Ocean, Southern Florida, Bahamas and Caribbean. Scientifically known as a member of the caribaoerum species, this is just one of many species within the Gorgonian family and Erythropodium genus.

Also known as the Encrusting Sponge, the Scleraxonia form is the only type of gorgonian with an encrusting nature. This coral is frequently confused with corals such as star polyps and pipe organs (of which it is a relative) that feature polyps of similar shape and appearance.

The encrusting coral spreads outward horizontally, similar to a mat, which makes this species of gorgonian distinctive from the others. This horizontal growth will morph into a smooth form of sheets, columns, or intertwined strands featuring delicate, hair-like polyps extending from its body. The mats of the encrusting gorgonian are usually greenish/purple or brown, with polyps that are green, white or brown.

Encrusting gorgonian polyps of approximately half an inch in length that emerge from its skeletal body to feed, they can full cover its entire bottom structure when fully opened. This tendency can sometimes cause problems for the coral. To the outside observer, accurate identification is difficult, since the blooming polyps take up the majority of its appearance. Additionally, the encrusting gorgonian will frequently expand over other corals, literally running over anything in its path due to its fast growing nature. This attribute makes the coral extremely competitive with a variety of species, sea anemones and other cnidarians. With this feature, the coral species has a distinct advantage to the competition.

Encrusting gorgonians grow in colonies of interlocked polyps, and some forms will create a specialized border between the colony and other corals that act as both defense and offensive mechanisms. This specialized border is made up of polyps that have developed elongated tentacles (referred to as sweeper tentacles) with tips packed full of nematocysts (a type of stinger cell), instead of the side branches that typically envelop its polyps.

Cultivating encrusting gorgonians is fairly simple since the species reproduces asexually naturally through fragmentation. In a home tank, the coral will encrust over many pieces of hard substrate- any leftover loose pieces can merely be removed and placed in a separate location, where the new segment will begin to form polyps and eventually encrust over the new surface. However, a potential drawback to maintaining this type of coral is because of how huge it can grow in such a short period of time. Even though the gorgonian is photosynethic, additional food sources will be required- good choices are cyclop-eeze, MicroVert, marine snow, or other invertebrate food.