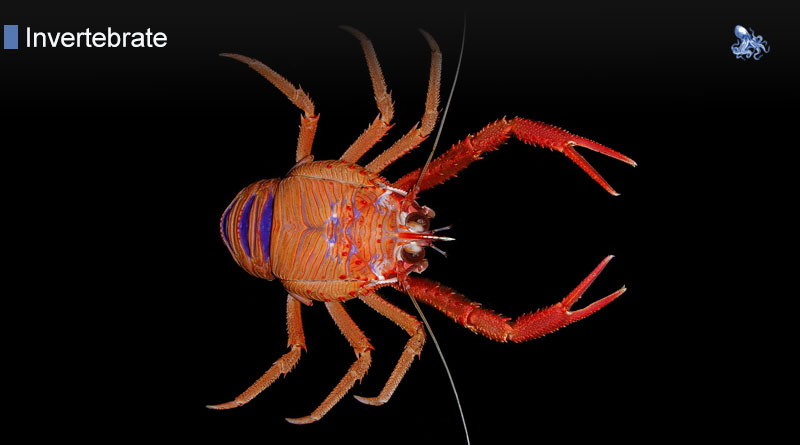 Crabs are water-dwelling crustaceans distinguished by 5 pairs of legs and categorized into two major groups: true crabs, also called brachyurans and false crabs called anomurans. The main difference between the two groups is to be found in the number of leg pairs used for walking: true crabs use four pairs of legs for this purpose, while false crabs have only two or three leg pairs to walk on.

Another distinguishing physical feature of anomurans is the size of their abdomen. While true crabs have abdomens that are curved under the body for enhanced protection, anomurans have a much longer abdomen that is not so well-shielded. In order to disguise their abdomen and to protect it, anomurans are in the habit of borrowing mollusk shells as a means to house their lower body.
Another feature that tells you that the animal in front of you is a false crab is the size of the fifth leg. While the fifth leg pair of true crabs is regularly sized, the last leg pair of anomurans is slightly shorter than the other legs – if you see a crab with a pair of short legs hidden under the carapace, it is most likely a false crab.

Anomurans are scavengers and predators. Some of the species employ techniques that involve deposit feeding, others would feed on algae, mollusks, insects, the larvae of flies or other invertebrates. Predator species mostly feed on prey captured from the floating water accidentally, but some species would engage in active hunting as well. The broad range of feeding techniques is indicative of the extraordinary adaptability of these creatures – whatever the composition of the water fauna in their habitat, they will find the way to have enough food.

The family of anomurans has numerous members and very little is known about their mating habits (in the case of some species, even the identification of the crab’s sex is problematic). What seems to be sure, however, is that mating is always preceded by courtship – a period during which males become aggressive as they compete for the female.
When the eggs laid by the females hatch, the crab babies born resemble mature crabs in every aspect, except that their carapace is thin and soft, making them vulnerable to attacks. Adult false crabs tend to their kids and protect them in safe places at the bottom of the water.