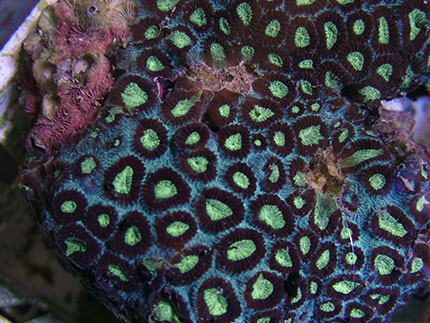 Favia is a genus of reef building stony corals which belong to the family Mussidae. Members of this genus usually form dome-shaped or oval colonies, with some species earning the name golfball corals. Contrary to the majority of other stony corals, these mostly inhabit the tropical waters of the Atlantic Ocean.

The colonies formed by these species are usually massive, with some species showing encrusting growth patterns. Colonies are either flat or dome-shaped, and in the cases of colonies growing through budding, they make take an oval shape. However, there is great diversity in shapes and sizes depending on species, with variety even in the same species or even the same colony. Some Favia species may be foliaceous, with disc formations. The corallites are usually just a bit higher than the level of the colony, and each corallite usually has its own wall. One corallite may hold one or multiple polyps. The septa and costae of the corallites are well defined and finely toothed, with rather large collumelae. The polyps extend only during the night to feed.
At the outer edges of the colonies, there are also longer tentacles called sweeper tentacles. These are used to “sweep” the waters in search of other corals. If found, these tentacles start to sting and to deter the others from growing in the vicinity. This is called a coral war, and it is used by the corals to ensure that there is sufficient space for their offspring to grow as well as for their own colony growth.

While most other stony corals are specific to the Indo-Pacific region, many species of this genus can usually be found in the Atlantic. Colonies can be found from the Caribbean and the East US coast to the East coast of South America, and to the equatorial waters of West Africa. Some species can also be found in the Indian Ocean, China Sea and West Pacific. These species can be found at depths of up to 30 meters, with colonies growing on coral reefs, in seagrass meadows or even on rocks.

Notable Favia species include F. fragum, F. maritime and F. pallida. F. fragum is also known as the golfball coral, and it can be found on both sides of the Atlantic Ocean in tropical waters. The colonies are hemispherical, with large corallites that are packed together.
Feeding
These corals are zooxanthellae and so a part of their food is generated by the tiny photosynthetic dinoflagellate they live in symbiosis with. The rest of the food comes by filtering nutrients from the water column or catching bacteria or small zooplankton organisms.

These corallites can reproduce via both sexual and asexual reproduction. Asexual reproduction can occur through intra- or extra-tentacular budding, fragmentation and polyp bailout. Sexual reproduction is achieved during synchronous events called spawning events that are specific to each species. During these events, the Favia species release large amounts of eggs and sperm that will fertilize either in the column of water or while the eggs are attached to the parent colony.