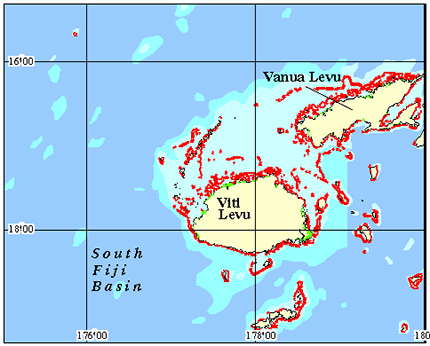 Fiji is one of the most beautiful places in the world and a very popular holiday destination. It is also home to a wide variety of coral species. The coral reefs around Fiji are closely monitored by the United Nation’s International Coral Reef Initiative (ICRI).

The marine geography and ecosystems of Fiji are very diverse. The island is surrounded by the largest coral reef system in all the Southwest Pacific. The area is around 3,869 square miles large and there are four major reefs in one large reef system.

The major reefs mentioned earlier are:

For those of you who don’t know, a fringing reef is any reef that is close to shore, while barrier reefs are those that usually run parallel to the shore but are separated from it by a lagoon – a lagoon that is simply too deep to support the coral growth.

Because the coral reefs surrounding Fiji are so extensive, a complete, accurate list of the marine life here has yet to be created. The variety of fish and invertebrates in the region is simply astonishing – from reef fish like the giant grouper, angel fish, parrotfish, giant grouper, the Napoleon wrasse, and butterfly fish, to giant clams and sea cucumbers, there’s basically almost nothing you can’t find hiding in the reefs of Fiji.