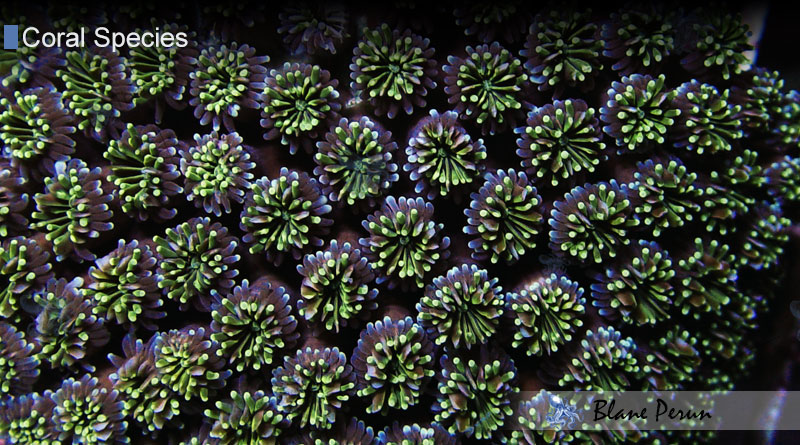 Galaxea is a genus of stony large polyp corals which belong to the family Oculinidae. These corals are often called galaxy corals, fluorescence grass corals and crystal corals. Some representatives of this genus grow some of the largest known colonies. These corals are zooxanthellate, heterotrophic and can reproduce both sexually and asexually.

The galaxy corals have low dome colonies which can grow massive. Galaxea corals are usually encrusting, with many polyps growing in between, creating the dense look of a galaxy. Shapes may differ depending on species, with dome shapes, arborescent, flat or even round-mounded colonies being found. Colors are usually dark shades of olive and brown, with tinges of purple or other colors. Corallites hold individual polyps that are small and crowded, with raised edges and sometimes even stalks. The tentacles extend during the day and the skeleton and corallites are only visible when they retract. Tentacles are usually greenish or yellowish and are mostly tipped with white.

The galaxy corals can be found throughout the Indo-Pacific region. They prefer warm waters with low water movement. Colonies can be found from the Red Sea to the Gulf of Aden, the East Africa coast, Samoa, North, East and West Australia, Japan, East China Sea and New Zealand. Colonies are usually found on reef slopes, at depths from 1 or 2 meters to 15 meters or more. Most species prefer turbid water that is rich in dissolved organic water as well as zooplankton.

Notable species include G. fascicularis, G. alta, G. astreata, G. archelia and G. longisepta. Perhaps the most common is Galaxea fascicularis. Colonies are dome shaped when young, yet with growth they become irregularly shaped. Colonies can grow up to 5 meters in diameter, making this one of the largest coral in the world. Polyps are embedded in round shaped corallites which are usually less than 1 centimeter across. Inside the corallites, there are radiating septa which connect with the columna, the center column. The tentacles are a few centimeters long, and these are used for feeding. These corals also have specialized tentacles called sweeper tentacles. These can be as long as 30 centimeters and are used to keep away coral colonies or other foreign organisms from growing too close to the colony. While this colony can grow to large sizes, it has been observed that position and light affect it greatly.

Galaxy corals are zooxanthellate and heterotrophic. The polyps host microalgae called zooxanthellae which supply them with organic carbon produced via photosynthesis. That is why most colonies prefer brighter areas and larger colonies are often found in shallow waters. These corals can also feed by capturing and absorbing dissolved organic matter, bacteria, zooplankton organism, etc.

Galaxy corals reproduce asexually through budding or sexually. The colonies release eggs and sperm in synchronized mass spawning events with fertilization to occur externally. The resulting larvae drift as zooplankton, and the ones escaping predation mature and fall on the ocean floor, where they form Galaxea colonies.