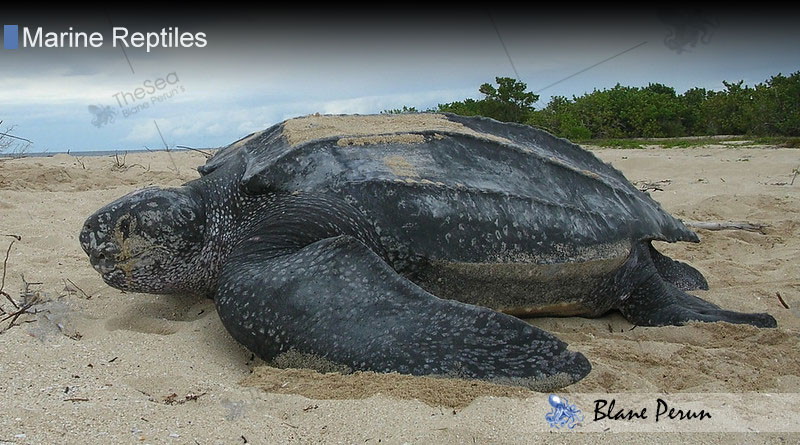 Throughout history there have been reported sightings of various giant sea turtle. Many such reports have been obvious hoaxes, yet some seem plausible, if somewhat exaggerated. One such report of a sighting was noted in 1883 by Captain Augustus Hall. Hall wrote of encountering a turtle of 40 feet long and 30 feet wide, with 20 foot flippers. Some believe this report may be true, although they dispute the accuracy of the measurements. Marine turtles continue to grow with age, therefore-perhaps if the creature was old enough it could achieve unusually large dimensions. Others believe this giant sea turtle to be a surviving Archelon, which existed during the late Mesozoic era, and others yet do not believe the report at all.

The African giant sea turtle is in desperate need of conservation. It is estimated that more than 2/3 of these marine turtles are slaughtered by area fishermen for food once they reach the nesting site of Ghana, Africa. Protected sanctuaries have been established in an effort to protect them, however, the desperate conditions of some of Africa’s people push environmental concerns from their minds and instead they are thinking of their survival. The cash they receive from selling turtle meat and their shells outweighs their environmental concerns. Other threats, such as dogs and various wildlife along the African coast also threatens the giant African sea turtle.

The giant leatherback sea turtle is the largest species of all marine turtle. Unique to the leatherback is the skin covered carapace. It does not have a hard shell like other sea turtles. These giants reach up to 7 feet and over 2,000 lbs at maturity! The leatherback is a the only descendent of a species dating back over 100 million years. Due to their extreme size, leatherbacks are able to retain their core temperature in cooler waers than other marine tutles and therefore are found in areas others cannot survive- such as Canada. The Giant leatherback sea turtle nests primarily on the beaches of Mexico.

Giant sea turtle facts include that unlike freshwater turtles, they are unable to retract their heads into their shells. They are large air-breathing reptiles, but have the ability to stay underwater for great periods of time when at rest; up to 5 hours. Although diets vary with species, none have teeth, but instead have beaks that are suited to what their particular diet is. Females only return to land to nest and males usually do not return to shore. One of the lesser known giant sea turtle facts is that they are innately solitary and ,except for mating, do not interact with one another.

The giant sea turtle population has dwindled due largely to man. Threats include, illegal hunting for meat and shells, getting caught in commercial fishing nets, Ocean debris like plastic which is ingested, coastal development degrading nesting areas, and artificial lighting along the shores which cause hatchlings to become disoriented and not find their way to the ocean. Although conservation efforts are in place the giant sea turtle population is still considered endangered.