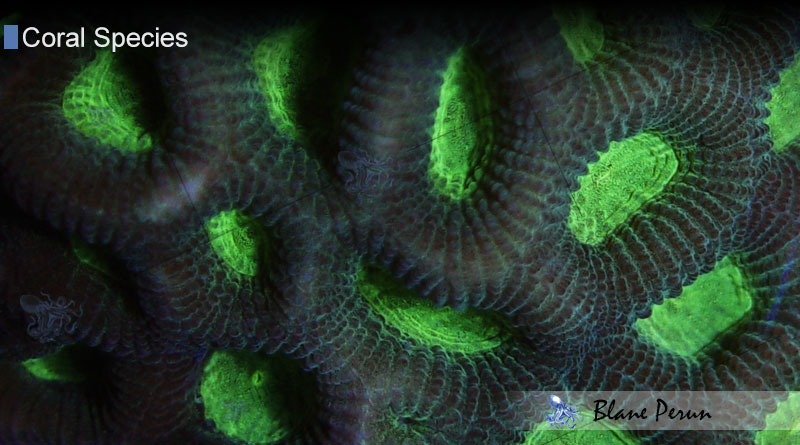 Goniastrea is a genus of stony corals which belong to the family Merulinidae. These corals usually form massive colonies that are round or dome-shaped. A common trait is that these colonies have distinctive lobes protruding. The polyps extend only during the night.

These corals usually form massive or submassive colonies, with some even forming encrusting colonies. The shape is usually a dome or a sphere which is most often taller than it is wide. Corallites are usually grouped 4 to 6, depending on the species. The main characteristic of Goniastrea colonies is that they have palliform lobes which give them the appearance of lobed boulders.
The walls of the corallites, which are shared between more of them, are meandroid and they form valleys, ridges and mazes. Colonies can grow to 1 meter in height, although most species grow smaller than that. Polyps have a center and sometimes large collumela. Colors range depending on the species as well as habitat, from green to brown and mixes of colors are often seen. The polyps stay retracted during the day, exposing the skeleton structure and the corallites and they only extend during the night.

These corals can be found throughout the Indo-Pacific region. They can be found in the Red Sea, Gulf of Aden, East Africa coast, Indian Ocean, China Sea, West Pacific and Pacific Islands and South to Australia. These corals are zooxanthellate and, thus, they are rarely found at depths greater than 20 meters. They prefer shallow waters with little movement, and turbidity is a factor, with most species preferring turbid waters.
Notable species
Goniastrea species are not as common as with other members of the Merulinidae family. Most notable are G. australensis, G. favulus and G. retiformis. Just as the name suggests, G. australensis can be found in the Northern coast of Australia, Great Barrier Reef but Red Sea, China Sea and the Pacific. This species forms dome-shaped colonies with prominent lobes. These paliform lobes are finely toothed and they also have large collumelas. G. favulus does not exhibit prominent lobes, which the colonies being mostly shaped as boulders. The meandroid valleys form prominent mazes, making the colony resemble a brain. G. retiformis forms colonies which are usually less than 50 centimeters across, with paliform lobes and usually deep calices.

These species feed either heterotrophic or through the dinoflagellatae they host. These symbiotic microalgae, the zooxanthellae, create basic carbohydrates through photosynthesis. These symbionts can provide the colony with as much as 90 percent of the food needed, especially in habitats where light is abundant. In darker waters or during the night, the polyps extend their tentacles and feed on bacteria, tiny zooplankton or dissolved organic matter.

These corals reproduce sexually and asexually. The colonies are hermaphrodite so they contain both sexes. During mass spawning events, they release sperm and eggs. Some species such as G. favulus release the sperm through jets, while the eggs are negatively buoyant and adhere to the colony. In this case, self-fertilization often occurs, while in the case of Goniastrea aspera, both eggs and sperm are buoyant and cross-fertilization is more common.