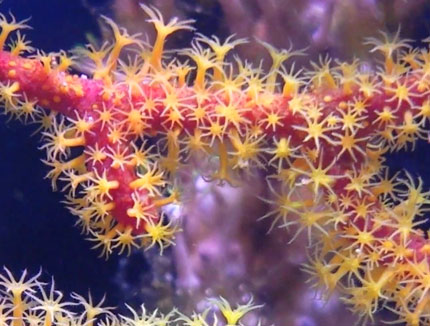 Most gorgonians will come attached to a base, which is the recommended format for purchase and is the first part of gorgonian care. If the tips of a gorgonian are dead (which means they have lost tissue from the stress of shipment or acclimation to a new environment), those areas should be removed immediately.

An additional quarter of an inch past the point of healthy tissue should also be removed so that any lingering infection can be avoided. Cutting or slicing these areas off with a small razor is sufficient for adequate gorgonian care.

Most gorgonian corals are photosynthetic creatures so will need a strong lighting source in order to thrive in a home tank, which is essential for gorgonian care. Metal halide lights that are used in artificial environments will be a new Gorgonian Care Reefadjustment for the gorgonian coral since it burns much hotter than the lighting in their native environments, but they will acclimate over time with appropriate gorgonian care. Even though these gorgonians have the ability to create its own energy through photosynthesis, it will still eat voraciously if supplemental food is provided. (Usually, supplemental feeding increases the growth rate and overall health of the gorgonian.) This is a helpful gorgonian care tip.

When a gorgonian coral is not photosynthetic, it can be harder to maintain in an artificial environment because it will need to be fed frequently (some as little as once a week, others as often as three times a week.) This is an important part of gorgonian care. The recommended diet for a typical gorgonian include detritus (organic matter contained in the tank water), brine shrimp, Daphnia, and Cyclops, or minced flake food, shrimp and clams. Most aqua culturists will agree that photosynthetic gorgonians are best suited for reef tanks, as non photosynthetic species are more difficult to keep healthy, and therefore will frustrate even an expert hobbyist. Knowing this is important for appropriate gorgonian care.

For proper gorgonian care, all gorgonians require a strong water source because of the outer layer of wax-like film that develops over its body from time to time. While the accumulation of this outer layer does not mean the gorgonian coral is diseased, if not removed in a timely fashion, a potentially harmful infection can develop. Algae infection can lead to tissue deterioration and even death. Therefore, favorable water quality is going to be the most obvious sign of coral trouble within a home tank, and equipping a tank with a surge devise is a recommended safeguard for gorgonian care. The polyps of gorgonians will usually indicate less than optimal water conditions by the degree to which they are opened, as they are very sensitive to changes in their environment. This is important to know for gorgonian care. Gorgonian care requires ideal water temperatures between 72 and 78F, a pH of 8.3 or 8.4, and sg between 1.0123 and 1.0125. There are a few predators of gorgonians that are sometimes sold to aquarists, including flamingo tongue snails. These snails will feed on the live tissue of a gorgonian, literally stripping it of its tissue and leaving a dead coral. Know this for good gorgonian care. In addition, small white frilly sea slugs can prevent polyps from expanding into larger colonies, and butterfly fishes and select angelfish will feed on its polyps and live tissue to varying degrees. Gorgonians are threatened by many hard corals, as their stings can be potentially harmful, so should not be placed within close proximity to them for optimal gorgonian care. In addition, some corals will literally grow over gorgonians, and it is recommended that rocks or other hard substrates be placed around the gorgonian in case this begins to occur for the best gorgonian care.

When it comes to propagating gorgonian corals, there are many methods that are practiced. Most frequently, super glue is used to attach the bottom of gorgonian corals to substrates, usually rocks or coral. The glue does not inhibit the growth of the new gorgonian coral and is ok for gorgonian care. Actually, the new skin will grow down onto the rock and eventually cover the entirely glued portion of the base stem. This process will happen rather quickly (sometimes in a matter of weeks) but the actual upward growth of the new gorgonian and subsequent colony will be much slower (most tank-raised gorgonians only grow 2 a year). Know this for gorgonian care. Using a razor blade or other sharp tool, slice off pieces of branches from the original gorgonian. The size of the cut segments is not of huge importance, but they should be no shorter than one inch in length, and all should be cut from the tallest portions of the gorgonian. Using a paper towel or dry washcloth, blot excess fluid off from the bottom of the stem/cutting and when completely dry, use super glue to adhere the bottom of the step to the side of a live rock or other reef-safe substrate. After this has been done, the new gorgonian can be placed into the tank. This is good gorgonian care.