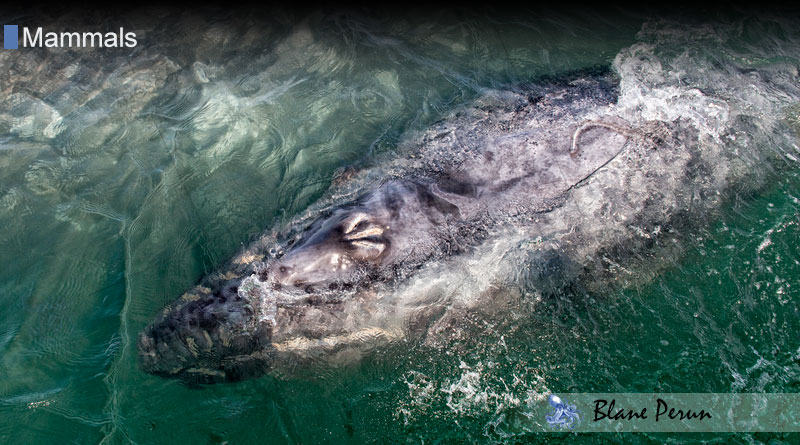 The gray whale is a migrating baleen, a close relative of dolphins, but much larger and much more ferocious – hence its old name, “devil fish”. Dwelling mainly the eastern and the western areas of the North Pacific region, these huge mammals are descendants of the filter-feeding whales that developed 30 million years ago and the only living species of the once extended genus.

The gray whale was named after the slate-gray color of its body. They are huge not only in adulthood – the average length of an adult whale can reach 50 ft., and they can weigh up to 40 tons, more than 5 adult elephants together. They are incredibly impressive when they are born, too: newborns are around 16 ft long.

Gray whales are usually accompanied by a number of other creatures such as barnacles, whale lice and other parasites that cover and encrust the skin of the whales and travel with them.

They have two flippers to help them advance and turn in water, and they also have baleen plates – large, bony formations that they use for capturing food.

The most distinctive feature that sets these huge creatures apart from all other whales is the fact that gray whales have two blow holes on the top of their head instead of only one, like others do. This is the reason for the characteristic V-shaped blow noticeable on the surface of the water.

Gray whales are bottom-feeders, which means that they scoop up the tiny organisms they feed on from the bottom of the sea. They eat amphipods, cumaceans, isopods, mysids, plankton and other minuscule bottom-dwelling animals; therefore, they prefer warm and shallow waters rich in nutrients. Gray whales spend summers in warm waters where they can avail themselves to plenty of food to satisfy their huge appetite – during this period, adult gray whales consume around 2,400 pounds of food, knowing that they will be able to eat much less during the winter. Calves usually consume about 190-300 gallons of milk a day.

Gray whales reach sexual maturity around the age of eight. Their breeding season starts at the end of fall, around October or November, and females usually have more than one male in one season. Their migration patterns seem to be dependent on mating – after fertilization, the whales start moving to reach the warmer waters by the time the calf is born. Gestation lasts about thirteen months, with birth usually taking place in the middle of January. The female then lactates to feed the calf for a bit more than half a year – a period followed by the gradual ceasing of maternal care. The estimated lifespan of gray whales is between 50 and 70 years.

Gray whales are in continuous motion, travelling around 10,000 miles a year. Their round-trip takes them from the feeding areas around the Arctic to the nursing areas around the borders of Mexico, so their characteristic blows can be frequently noticed from ships that sail the area.