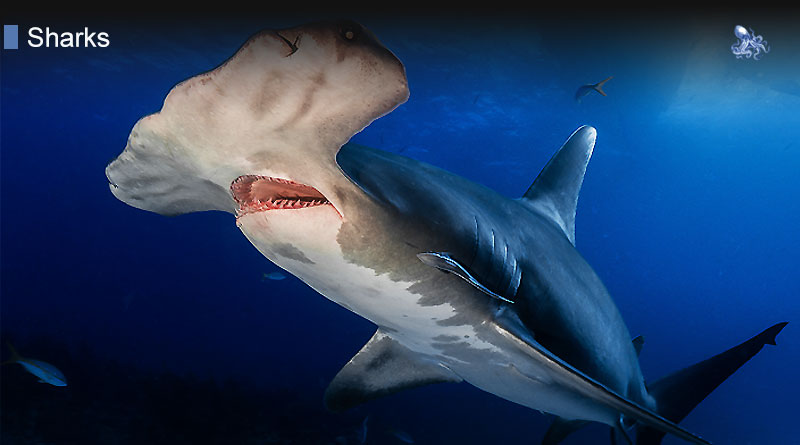 The largest of all hammerhead species, the great hammerhead shark (Sphyrna mokarran) is around 6 meters long. It is a very common species, being frequently found in the warm and temperate shallow water areas in almost all the seas and oceans.

Great hammerheads have a varied diet. They feed on invertebrates such as lobsters, crabs and octopuses, bony fish such as sardines, toadfish and jacks, sometimes even on smaller sharks and they are also known to be cannibalistic.

The great hammerhead is viviparous. Embryos develop inside eggs kept in the mother’s body. They feed on the egg yolk for a while, after which, when they have used up all the yolk inside the egg, the yolk sac transforms into a substance very similar to placenta. Gestation is a bit shorter than one year and one litter (the name used for the group of shark pups born at a time from the same female) can contain up to 55 juveniles. Great hammerhead sharks live for 20-30 years, but there are individuals that live for much longer, in some cases 40-50 years.

The unique shape of the great hammerhead’s head is the result of a long process of adaptation and it serves the purposes of making the hunt for food more efficient and allows the shark to see better than other shark species. The distance between the eyes ensures a wider field of vision and allows the animal to look into the same direction with both eyes, pretty much like humans do. They can also rotate their eyes and see in a 360-degree range;

Stingrays are among the most favorite delights of great hammerheads. Stingrays are venomous, so the great hammerhead has developed a special technique to eat it before the ray can sting: the hammerhead finds the ray buried in the sand of the ocean floor, sneaks to it, then holds down the ray using the hammer-shaped head before the ray can sting, taking bites of the prey while it is alive;

Hammerheads are known to be swimming close to the surface of the water not only to find food, but also to get a suntan – darker skin provides better camouflage, and some sharks sunbathe so much that they become almost black. However, no great hammerhead shark suffers from skin damage – lucky guys!