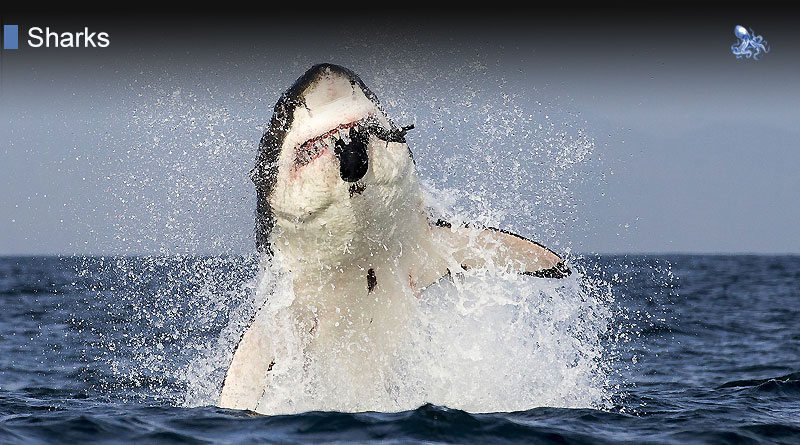 Scientists have observed great white shark diet habits, developments and uncommon quirks for years, and they have gathered a great amount of data on the subject. We now know a great deal about how great whites attack, what types of animals they prey on, and which type of prey they tend to avoid. While some sharks like to eat almost everything, great whites actually have specific dietary preferences that keep them from attacking humans on a regular basis.

Research and observations show that white sharks have diverse feeding habits, allowing them to prey on a wide variety of sea mammals and fish for sustenance. Most commonly, the sharks use their superior bite force, speed and strength to attack their prey from above. Depending on the size of the prey, they can eat an animal whole, or – in the case of large elephant seals, for example – simply apply an accurate bite and allow the animal to bleed to death before feeding on it. The sharks are highly opportunistic and normally seek out prey with a high degree of energy-giving fat – which causes them to ignore fish and mammals with large, hard and well-developed bones (including humans). They rarely prefer a straight fight and, will in most cases, ambush their prey, exposing themselves to attacks as little as possible.

Seals and tuna are the most common food sources associated with the great white shark diet. Dolphins and whales are also on the menu, particularly most species of beaked whales, which, unlike blue whales and other large species, only grow to a size of about 4 to 13 meters – entirely manageable for an agile great white shark. Juvenile sharks are usually incapable of using any of the strategies employed by adults in attacking marine mammals and larger fish, and must usually feed on smaller species such as smaller fish and in some cases small mammals such as sea otters.

Great white sharks don’t use the same techniques to attack all animals. They are able to improvise depending on the size, agility and other characteristics of the animals they hunt. They can use their fine-tuned senses to capture elusive animals just by detecting their heartbeats, and can intelligently attack large sea mammals like elephant seals by ambushing and attacking them quickly from behind. This technique doesn’t hold up against smaller, more agile fish and sea mammals, which the great shark attacks from below, pulling them down into deeper waters and crushing them with their powerful teeth until they stop struggling. Research regarding great white shark diet and feeding habits also shows that the individuals can attack and feed on each other in rare situations.

What Do Great White Sharks Weigh

October 23, 2016 Comments Off on What Do Great White Sharks Weigh

Measuring the accurate great white shark weight for most specimens can be a difficult task, and larger great whites can

How Long Is The Reproduction Cycle Of A Great White Shark

October 23, 2016 Comments Off on How Long Is The Reproduction Cycle Of A Great White Shark

What Is The Natural Habitat Of A Great White Shark

October 23, 2016 Comments Off on What Is The Natural Habitat Of A Great White Shark

What Is The Diet Of A Great White Shark

October 23, 2016 Comments Off on What Is The Diet Of A Great White Shark

October 23, 2016 Comments Off on Diving With Great White Sharks