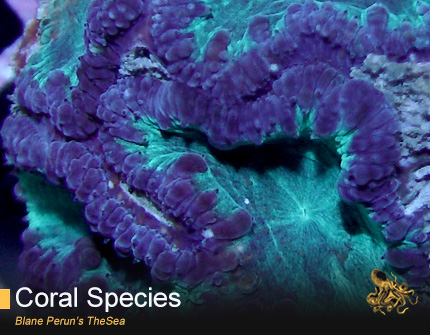 The green blasto is no different then the red, just less common. Both are rare hard coral found in the Indonesian and Pacific Oceans. They are far more common in low laying reefs in Bali, Tonga and Jakarta. Green blastomussa are sometimes mislabeled as a Green Pipe Coral- the two are used interchangeably in some journals and classifications.

The green portion of the  title comes from its neon green center that lightens to a rust or brown on the perimeter, although some types  have red or brown colorings mixed into its body. Green blasto can be found in both  wellsi and  merletti  of hard corals. I have on two occasions imported solid neon green with yellow mouth parts.

Dense and compact when opened, the green coral looks like one large mass, and their rounded appearance looks incredibly similar to a brain coral. Although one would not be able to tell at first glance, there is calcium based skeletal underneath it’s blooms, from which the green polyps actually emerge via stony tubes. These are not often seen, since the polyps take center stage when the coral colony is expanded. All blastomussa corals, including green have nocturnal polyps.

Because of its colorful coat and difficulty to harvest, the green blastomussa are a favorite among reef enthusiasts and hobbyists. If choosing between a wellsi and  merletti, the beginner aquarists will have higher rates of success with the green merletti. Within an artificial tank, the coral will spread quickly and expand over many surfaces in groups of smaller colonies. Like any coral, the green blastomussa will require optimal tank conditions to thrive. Tailored lighting, sufficient water movement, food quantities and the addition of trace minerals are a must. The coral should be purchased already attached to a piece of live rock, but if not, use a coral-safe glue to secure the specimen to similar substrate. Depending on the lighting conditions, the coral may even be placed in the bottom of the aquarium on fine sand.

If the  polyps are not expanding fully, the culprit could be that the coral is placed too close to the light source or is in too high of water flow. For this reason, place the blasto out of direct light in moderate (not direct) current. They prefer a diet rich in marine snow, phytoplankton and other organisms for its filter feeding methods.

The coral is very peaceful in nature, and does not have a history of encroaching on neighboring coral or other creatures that reside within close distances. However, it should be kept away from stinging corals that could potentially damage the green blastomussa with their far reaching tentacles.