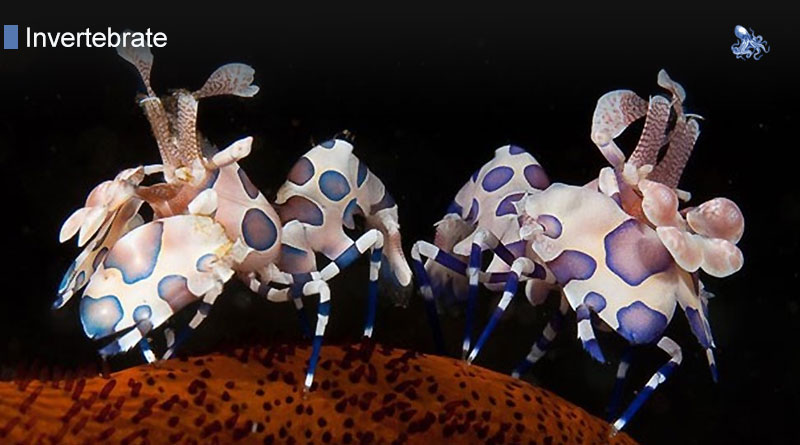 The rather small harlequin shrimp is named after its highly exotic and unusual coloring. It rarely exceeds two inches in length, making it one of the smaller carnivorous shrimp of the sea. The number of ways in which this particular shrimp is unusual does not end with the bright, fauvist coloring, though. Its diet and place within the Indo-Pacific sub-intertidal ecosystem of which it plays a part is just as unique. The harlequin shrimp is known for feeding exclusively on starfish, including the very large Acanthaster starfish that it can take days to completely consume.

The harlequin shrimp is one of a handful of monogamous decapods. A male and female will generally mate for life and, even more interestingly, form a hunting team that will coordinate when necessary for attacks on large starfish. When a pair of harlequin shrimp need to eat a large Acanthaster starfish, they will often work together to turn the creature over, giving them access to the undersides of the legs that they begin to consume as they work their way up to central disk. They can be found in nature without mates but it is very uncommon.

It is well known that the harlequin shrimp prefers to live exclusively on starfish. This is not always possible, however, and they have been observed changing their diet when necessary, in the wild. Although the harlequin shrimp seems to prefer easy meals made of small, sedentary starfish, the relative rarity of these kinds of creatures in comparison with the larger ones means that the shrimp rarely has a choice. For this reason, the harlequin shrimp has adapted well to meet the needs required to tackle the large and unwieldy starfishes they can catch most often.

One of the first things that many observers or pet owners of the harlequin shrimp notice is that it likes to move its claws constantly. It is very common to see both the male and female in constant motion, especially with regard to their claws. The fact that the male and female tend to work together in a highly organized and communicative team is also unique among crustaceans, especially decapods. Research is ongoing as to what level of intelligence this may represent within the small shrimp, but surprising conclusions may be reached soon.