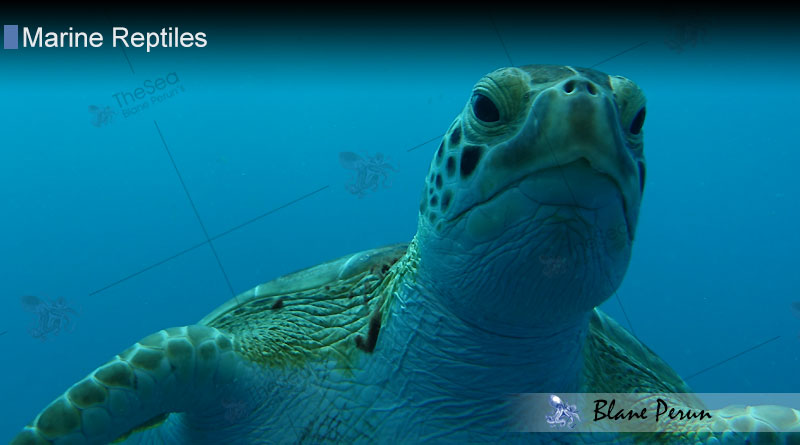 Sea turtles have an impressive lung capacity and an ability to dive for several hours. As marine reptiles that require air instead of water, they have to make frequent trips to the surface in order not to drown. They can, however, submerge their bodies to great depths as well, and they are known for their unique ability to control their buoyancy quite accurately. Most species of sea turtles are incredibly well-adapted to their marine environment, and can often hibernate underwater, similar to their freshwater cousins. They are also able to regulate their body temperatures effectively, so they can often maintain it at a higher level of warmth than the surrounding water.

As air breathing reptiles, sea turtles have lungs that require them to go back to the surface and breathe after a dive. Because of the lengthy amounts of time sea turtles spend underwater, and their natural movement reminiscent of that of sea mammals and fish that spend all their time in the depths of the ocean, it can be easy to overlook the fact that breathing and lung capacity play a key role in sea turtles’ underwater survival. Unlike most marine mammals, sea turtles don’t have any special adaptations to allow them to increase their blood or tissue oxygen supply. Instead, their lungs are the only available oxygen storage, and can retain enough oxygen for routine aerobic dives of up to 30 minutes.

Sea turtles have some of the most efficient lungs in the animal kingdom. Not only are they especially equipped to store a larger concentration of oxygen, but they are also capable of controlling buoyancy to a significantly accurate extent. Studies conducted on the capacity for buoyancy of loggerhead turtles have shown that using the oxygen supply in their lungs can affect the sea turtles’ buoyancy, beneficially altering their diving behavior. Due to this fact and their impressive anaerobic abilities, most sea turtles can comfortably stay submerged for up to 3 hours, when they don’t move too fast. When they ration their oxygen reserves even more, some turtle species can even stay underwater for 10 hours or more.

As a result of their remarkable lung capacity, anaerobic abilities and controlled buoyancy, sea turtles are capable of maximizing their diving efficiency to the point that they can easily dive to depths of hundreds of meters without placing themselves in any danger. Leatherback turtles are able to dive to a depth of more than 1,000 meters in search of jellyfish, and the depth that other sea turtles can reach is only limited by their more rigid breastbone structure and lesser ability to absorb nitrogen as effectively prior to decompression after deeper dives.