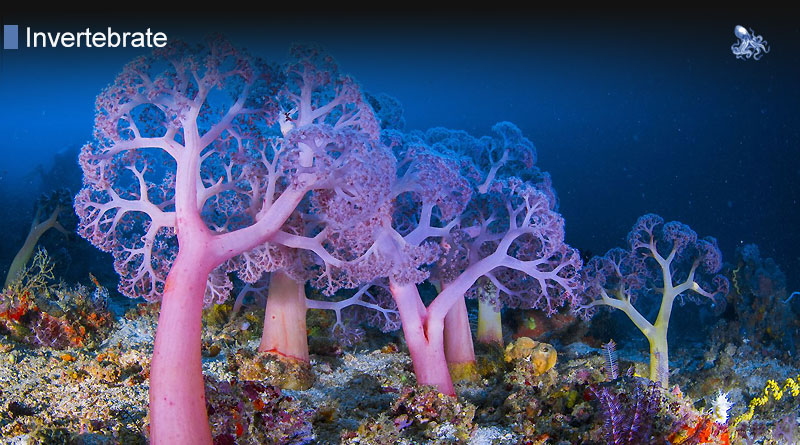 Invertebrates are among the most fascinating creatures in the world, and they also make up most of the animal life known today. From insects and centipedes to crustaceans, crabs, worms and leeches, invertebrates account for a large part of all species of animals on the Earth. Their unusual anatomy – most especially their nervous systems and their diverse ability to interact with their environment – makes them extremely interesting to study.

Experts can tell you that invertebrates account for no less than 97% of all species known to man. While most of the species involved are adapted to live in the ocean, many invertebrates, such as insects and spider species, are able to thrive on land as well. As the name would suggest, invertebrates are not capable of growing a vertebral column, and while they do not have skeletons, many types of species, such as corals and arthropods, are able to generate or grow skeletal structures or exoskeletons from a variety of materials, mainly designing them to serve as their homes. Unlike mammals, birds or reptiles, invertebrates are far more diverse and develop very differently depending on species or habitat.

Invertebrates are generally classified in various types of groups, some of them – such as insects – featuring more than a million estimated species, while others are much less numerous (there are, for example, only 4 known types of horseshoe crabs in existence). Corals, crustaceans, jellyfish, sea anemones and mollusks are among the most prevalent invertebrate species that populate the oceans of the world; aside from insects, arachnids are the most diverse group, featuring just over 100,000 species. Compared to vertebrate species, which only extend to a number of 66,000 types of animals, invertebrates are staggeringly more numerous, with a total of about 1,305,000 known species.

First of all, it’s important to mention that invertebrates were the first types of animals to evolve on Earth. They play an important role in maintaining a variety of different food chains keeping ecosystems in balance, as well as food webs that maintain the structural integrity and continual growth of coral reef formations in the ocean. Many species of insects also play a major role in supporting the flora of the entire planet.

There are a lot of different types of invertebrates with special qualities that have developed and evolved in unique ways over thousands or even millions of years. Their senses are particularly fascinating, due to the wide existing range – from fairly simple to highly complex systems, such as the ability to sense gravity, airborne chemicals or pressure changes. Hermaphrodites are quite common in many species of invertebrates, their reproductive cycles varying from asexual to typical sexual reproduction, depending on the species. Also, body symmetry can range from the more familiar bilaterally symmetrical bodies of arthropods to radial symmetry, as present in the 9,000 or so species of cnidarians that can be found in the ocean. In spite of having no back bone, invertebrates are also surprisingly resilient, being counted among the most remarkable types of animals known on the planet.

Freeport is a city and district in the northwest Bahamas on an island simply known as Grand Bahama. It was

6 Months after my trip to Turks I was diving in Curacao, and this is a trip I was looking

London is one of the largest cities of the world today, and there is evidence that it was already inhabited