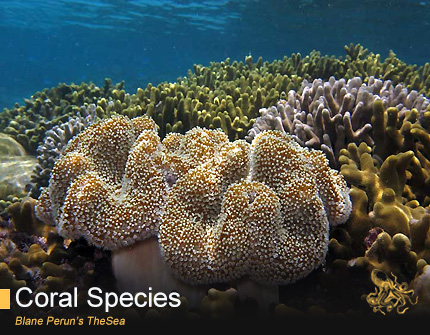 Many first timers to the aquarium hobby will find the leather coral to be an excellent choice due to its attractive appearance and relatively low maintenance requirements.

Reef tanks will need to have moderate to strong water movement so that the water can help the leather coral to shed its outer layer of waxy buildup and remain free of infection and to prevent other corals from growing over the leather coral. It is important to remain aware of how often or long the leather coral is retaining this layer of debris, as it is used in the wild as a protective mechanism, and could signify that the leather coral is under stress, such as perceiving a threat from a neighboring inhabitant or being placed in a new tank. It is normal for the leather corals polyps to retreat into the base of the coral at night, but be aware if the polyps do not expand for more than a week, as it could be a sign that the coral is stressed.

When selecting other creatures to keep inside the same tank as a leather coral, be aware that the leather coral can sometimes be aggressive to certain invertebrates. However, most of the time leather corals are passive creatures and have more of a chance of being harmed themselves than disturbing others. In addition, leather corals should not be placed in close proximity with other corals mainly due to its varying sizes (although they can be cut down easily if its size gets to be a problem.) Keep in mind the toxic chemical system the leather corals employ as a defense mechanism in the wild. There is a way to get around this problem, which involves obtaining a quality protein skimmer and alternating carbon into the tanks filter every so often.

Leather coral will adapt to varying levels of light, but should be kept at the same level it was originally exposed to during time of purchased before attempting to drastically change its environment. Use caution on the type of lighting used in the tank, as bright metal halides has been known to burn the leather coral at first exposure. The temperature of the reef tank should be set at a constant level, somewhere between 72 and 78F, with a pH value of around 8.3. When it comes to feeding a leather coral, they are actually photosynthetic and are therefore responsible for feeding themselves all on their own, another benefit of the leather coral. There are certain chemical additions that will help create and maintain a healthy leather coral, the most frequently used being calcium, iodine and strontium.

It is very common for the leather coral to be cultured in captivity and are actually good practice corals for the beginner. The best way to do this is by taking a large knife and removing a polyp entirely in one swift slice (no smaller than 3×1 wide) from the point which another begins. This fragmented polyp can be supported with a rubber band or piece of string onto a new solid surface (a clean rock is recommended) until it is healed and begins to fuse together on its own. Some people provide the leather coral with a dose of Vitamin C before and after the cut to prevent infection.