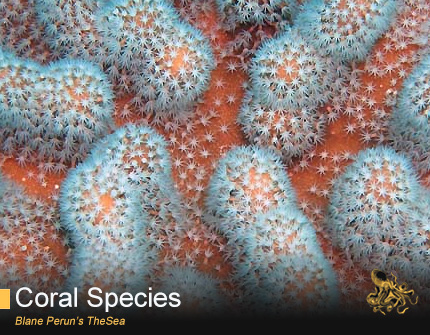 Leather coral, one of over 36 species belonging to the genus Sacrophyton, can be found in the warmer regions of the Pacific Ocean and Red Sea.

The leather coral exists in colonies, with each individual colony extending up to 3 feet in length, but appearing much larger due to the colonies close proximity to one another. Leather coral colonies live on drop-offs and along walls of coral reefs, strategically positioned in areas where ocean currents will carry food directly to their polyps and slough off the layer of waste and algae that collect on its surface over time.

In contrast to hard corals that produce skeletons, leather coral is classified as a soft coral because its bodies are non-calcareous. Instead, the shape of a leather coral is created by sclerites, microscopic pieces of skeletal calcium in the form of sharp, club-shaped spindles.

These sclerites will shape the leather coral into a form of a mushroom, featuring a thick stalk and a rounded cap called a capitulum that will fold as the coral ages. Leather coral are octocorals, distinguished by eight tentacled polyps (usually white or gold) that surround its mouth. Each tentacle is made up of pinnules, additional branches that that develop along the length of each arm. The long, feathered polyps extend from the top of the capitulum, a smooth area referred to as the polyparium. Two types of polyps emerge from this area- the main polyps, autozooids, responsible for feeding, and secondary polyps, siphonozoids, responsible for water circulation. Autozooids retract and extend based on the presence of sunlight, so the leather coral will alternate between a leathery surface when retracted and prickly and sharp when extended.

As a polytrophic coral, leather coral gets its nutrition from more than one source. One such way is through its symbiotic relationship with zooxanthellae, a tiny species of algae that exist under the skin of sea creatures. Using its tentacled polyps, the leather coral captures zooplankton or phytoplankton as waves drift by the reef, extracting the desired algae from the entrapped creatures. The zooxanthellae provide nutrients and energy to the leather coral through photosynthesis, and in return receive oxygen and a safe place to live. Leather coral also captures prey such as micro plankton, which are carried into the mouth through ciliary action. Additionally, mucus secretion and ciliate absorption play a role.

Leather coral form new colonies through both sexual and asexual reproduction. During sexual reproduction, leather coral will create planulea that metamorphasize into an adult forms through mass spawning events. These events are usually triggered by a seasonal factor, when the leather coral will release millions of eggs and sperm that combine to form individual larvae and ultimately migrate to establish separate colonies. However, leather coral also reproduce asexually through fragmentation and budding. During fragmentation, a piece of leather coral is broken off due to a heavy wave or rough weather, but will resettle while continuing to grow which produces a new colony. During budding, the leather corals polyps will separate and divide into new individual polyps, a process that continues and also forms a new colony. The leather corals main defense system is through secretion of various toxic chemicals that are used in a number of ways, including during reproductive cycles, in species recognition, to deter predators, and to capture space. In addition, the extremely sharp sclerites of the leather coral are a defense of their own- if another creature attempts to feed on the leather coral, its entire mouth and digestive system will be cut into tiny pieces by the daggers.