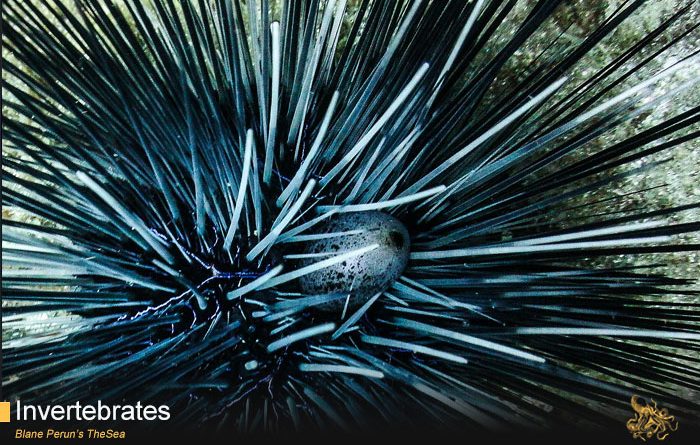 The long-spined sea urchin is a type of sea urchin commonly associated with the species belonging to the family Diadematidae and the genus Diadema. Species such as the Diadema savignyi, Diadema mexicanum or Diadema antillarum are all known as “long-spined,” essentially being described as creatures made up of a center body called a “test” which is surrounded by long, radially arranged spines that radiate outward from its center. Depending on the specific species involved, the distribution of the long-spined sea urchin may vary, with species like the Diadema mexicanum being commonly found off the coast of Central America, while the Black Longspine Urchin is more prevalent in the Mediterranean and Red Sea.

The sea urchin lives at a depth of about 1-10 feet in most cases, populating coral reef formations and lodging themselves into various crevices that only allow their spines to be seen. They may also live in areas that leave them more exposed to predators and free flowing water currents, in the event that they are not supported by entire communities of long spined sea urchins. The Diadema, however, always seeks out places where sunlight is at its minimum, and only comes out into the open at night in order to feed. In most areas where these urchins can be found, such as the Caribbean, the Red Sea or the Mediterranean, their presence is vital to the maintenance of the food web.

Diadema species normally feed on algae. They also tear up the mat surface by creating abrasions and thus helping to contain algae growth in order to keep the coral reef food web in balance. Depending on the type of species, the sea urchins can differ in their biological make up, which allows them to inhabit anything from sandy beds to back reefs and seagrass regions. Their slightly flattened test grows up to a 9 cm diameter, while the spines can reach 25 cm in length.

The spines of this creature serve an obvious purpose: that of defending it against attack and ensuring that the test is completely protected against predators. However, injuries caused by the spines themselves are made even worse by the toxins secreted by the creature. Also, the spines tend to break off, and thin pieces may remain encrusted in the skin of the attacker. Because of its toxins, human contact with the long-spined sea urchin should also be avoided.