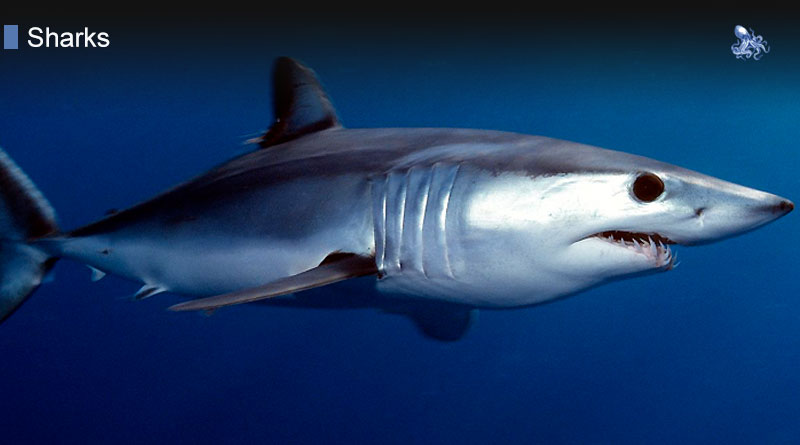 The longfin mako shark is a powerful, large apex predator that we don’t know too much about. One of the problems that scientists are faced with when studying the longfin is that it has very few distinctive features and its almost complete similarity to the shortfin mako shark makes identification very difficult.

Longfins have a wide distribution, but they are thought to be very rare, the exact size of the longfin population being difficult to assess also because they migrate over large distances. All that scientists know about the habitat of these sharks is that they are pelagic, living in the open seas, probably in most temperate and warm waters. They have been found around the east coast of the United States, around Cuba and Brazil and probably in the Mediterranean and in the Indian Ocean, too. Longfins spend the day in the surface layers of the water and the night in the deeper waters. They are usually found in depth between 110-220 meters.

Lonfins are large sharks, usually growing longer than 2.5 meters, with females being larger than males. Longfins are slimmer and their fins are less developed than in other shark species, which might indicate that these sharks are less active and slower than others. They have a slim body, large eyes and a long snout that is not pointed like in the case of the shortfin mako. Their dentition is very impressive: they have 12-13 rows of teeth on the upper jaw and 11-13 rows on the lower jaw. The teeth are so long that they can be seen even when the shark’s mouth is closed. The first dorsal fin is long, while the second is shorter. Its skin is covered in ridged, toothed dermal denticles. They are of a bluish-gray color, darker on the top and they have white bellies.

Longfins are slow-moving creatures, but they are able to reach considerable speeds on short distances when they are hunting. They primarily attack schools of smaller fish, but they also feed on octopuses and sometimes they prey on larger fish such as swordfish.

Longfins are large and they have very dangerous looks, but they are quite harmless – no attacks against humans have ever been attributed to these fierce-looking creatures. Mako sharks are ovoviviparous, giving birth to live juveniles, usually 2-8 of them in one litter. The embryos develop in eggs, then they hatch and continue to stay inside the mother’s body, feeding on the unfertilized eggs in the uterus. Juveniles are 97-120 cm long when they are born. The length of the gestation period is not known and lifespan related information is not available either, but if longfins resemble shortfins in this regard, they probably have pregnancies that reach about a year and they live for 28-35 years. Sexual maturity seems to be more dependent on size than on age – both male and female longfin mako sharks start reproducing when they reach the length of 2-2.5 meters.