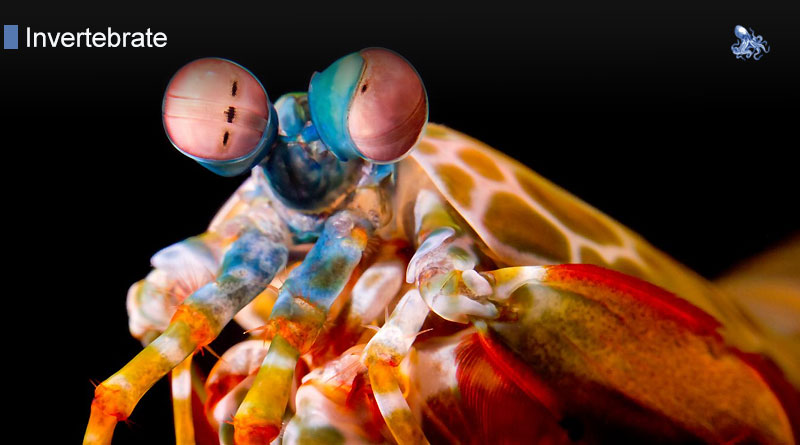 Stomatopods, known commonly as mantis shrimp, are large and unique crustaceans that can be found distributed worldwide. They are also known as prawn-killers, sea locusts and, more recently, thumb-splitters. The latter name comes from the unique set of powerful claws that it uses for hunting and that, in the case of many domestic handlers, have led to sharp, painful gashes and even broken aquarium tanks. Mantis shrimp are generally solitary predators that often make up one of the most ecologically important hunters of their habitat.

Stomatopods of all shapes and sizes share a number of key characteristics between all extant species. All of them prefer tropical and sub-tropical climates, where they hide in between rock formations or in burrowed holes. Some species are active only during the day, with others preferring a nocturnal hunting cycle. A few are even crepuscular, meaning that their most active periods occur during dusk and dawn, with the rest of their time spent resting inside of their burrows. Stomatopods are unique among crustaceans in that they actively hunt their prey instead of lying in wait or setting up “stations” like cleaning shrimp tend to do.

Over 400 different species of mantis shrimp have been identified so far, and are broadly categorized by the type of hunting apparatus that they use. Spearing claws are used by some species to snag and thresh their prey using a biologically unique mechanism that shoots the spiny barb out of the body with great force Smashing claws are adaptations that some species of mantis shrimp have developed with the goal of having a spring-loaded club then used to beat prey. Both of these are highly effective and biologically unique weapons that move fast enough to produce cavitation bubbles and shockwaves.

These species of shrimp exhibit excellent eyesight and may have the most biologically complex eyes in the entire animal kingdom. They have rows of specialized cells in their stalked eyes that respond to ultraviolet light, light polarization, and depth perception. The mantis shrimp can even detect depth using a single eye because of the tripled stacks of photoreceptors present on each stalk. It is even suggested that the mantis shrimp may be able to detect circularly polarized light, what no other living creature can do.