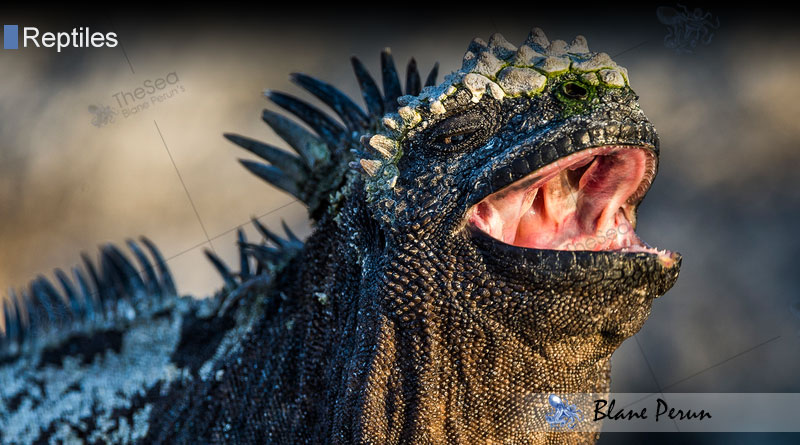 The majority of the world’s iguanas belong to land species, the only exception being the marine iguana of the Galapagos. This creature is unique in its choice of habitat, but not only: marine iguanas display some truly amazing forms of behavior, such as sneezing, even! Let’s take a closer look at them!

Scientists think that marine iguanas have evolved from land species about 8 million years ago. The Galapagos archipelago gave home to large iguana populations, and today’s marine iguanas are thought to originate from the islands that submerged.

Marine iguanas have developed some extraordinary features to adapt to the special conditions of living in salt water habitats. These medium-size lizards – adult iguanas can grow to be 3 m long – forage exclusively on marine algae. They prefer algae that live in areas where the water is colder – there are 4-5 species that they prefer, mostly red algae -, therefore iguanas have developed unique thermoregulatory features and behaviors to maintain their body temperature constant. The iguana’s body displays other features that serve life in marine habitats as well: the nose is blunt, making it suitable for feeding on seaweeds, the limbs are strong and clawed to allow the iguana to climb rocks and the tail is flat to make swimming more effective.
Adaptability is certainly the characteristic that helped iguanas survive millions of years and the feature that helps them endure the changes in their environment today. They are able to adjust to changes in food availability, switching to algae other than their favorites and they are able to adapt to changing conditions on the long run, too. A long-term research that studied the El Nino effect in the Galapagos area found that marine iguanas have become about 20% shorter to be able to cope with food scarcity. In La Nina periods, when algae are more abundant, iguanas increased their body size again.

The special feeding habits of the marine iguana have brought about interesting changes in the ways these animals digest food and eliminate waste as well. They have developed special glands called salt glands to be able to cope with the excess salt ingested with their food. The gland is located just above the iguana’s eyes and it is responsible for filtering the salt out of the animal’s bloodstream and eliminating the sea salt collected. Iguanas practically sneeze out the excess salt through these salt glands, spraying it out in the form of a salty fluid. After sneezing, the fluid eliminated usually falls back on the lizard’s head, drying there and forming a strange-looking salty crust.

Marine iguanas eat almost exclusively underwater. They are able to dive up to 30 m deep in search of algae beds and they have developed the amazing ability to hold their breath for 45 minutes. After feeding, they usually digest their food on the rocky coast, in the sun, because they are cold blooded and they need to warm up. Their colors also help them absorb the heat coming from the sun – most of them are of a dark grayish-brown shade, with only the males displaying brighter colors during the mating season.