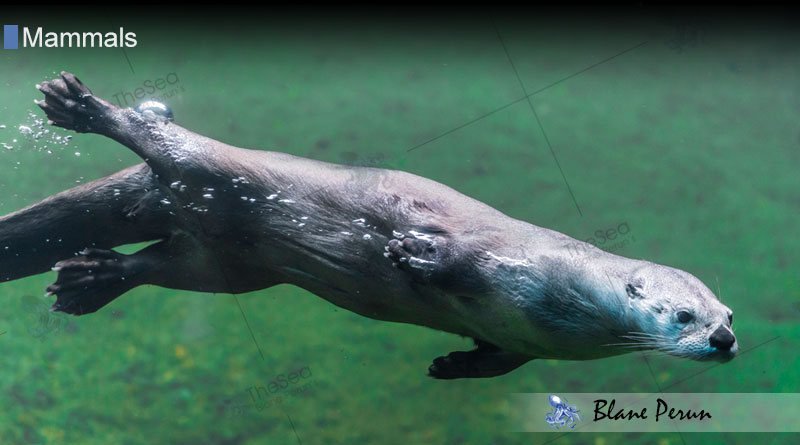 Sea otters are small-sized marine mammals living on the eastern and the northern parts of the North Pacific area, on the coast. Adult otters can reach the weight of almost half a quintal, which makes them the heaviest in their family (weasels), but they are still the smallest of all marine mammals.

Sea otters hunt for their food diving under the surface to get the sea urchins, clams, crabs, snails and other small marine animals dwelling the sea bed. They need to consume about a quarter of their body weight each day to be able to support their extraordinary high metabolism. They prefer the shallow waters just off the coastline, where such food is plentiful. However, sea otters can dive to 330 feet in pursuit of food and they are able to hold their breath for 5 minutes!

Male otters are usually larger than females. The average weight for adult males is around 45 kg, but they can easily reach 54 kg, while females are usually not larger than 35 kg. Their length is in the 1.4-1.5 m range. The otter’s body is an amazing example of evolution. The front limbs have become shorter and thinner, serving mainly purposes of processing food and leaving the strong hind legs and the tail to do all the propelling underwater. Otters have huge lungs that allow them to float on the surface of the water for long periods of time. Otters also have long whiskers that allow them to locate food even when the waters are muddy or visibility is poor for some other reason. They have a strong smell, very good eyes, but average hearing.

They are polygynous, which means that males have more than one female during a mating season. The mating season lasts year-round, with births taking place all throughout the year as well. The gestation period varies largely, from four months up to a year, the reason for this special characteristic being that otters are capable of a reproductive strategy called delayed implantation to avoid putting the life of the mother and of the embryo at risk if the environmental conditions are not favorable for procreation. Otters usually give birth to only one pup. Pups are almost fully developed when they are born; their eyes and ears are open and they have fur as well. The young are nursed for 6-12 months, depending on the habitat and the rearing is done exclusively by the mother.

Otters prefer coastal waters that are around 20 meters deep and they very rarely go further than one kilometer off the shore;
Otters have a thick coat of fur that is impermeable by water, allowing them to spend a long time in the water;
1 square centimeter of their coat is made up of 150,000 hairs, making otters the species with the thickest fur in the entire animal kingdom!
They have adapted marvelously to their environment. They are able to close their eyes and their ears, and their back feet are webbed.
Now that you’ve learned that sea otters can dive to 330 feet and they have so many aces up their sleeve to tackle the surroundings, wouldn’t you love to see them up close?