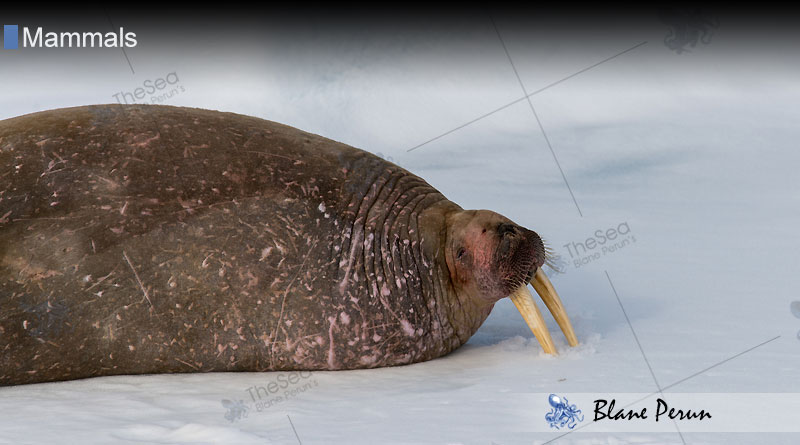 Walrus, these huge marine mammals to be found mainly in the Arctic Ocean, around the North Pole, and in seas on the Northern hemisphere, are well-known for their characteristic appearance and strange way of movement: these bulky animals have huge tusks and thick, long whiskers and, when it comes to pulling themselves out of the water, they use their strong tusks as a walking aid. Therefore, it seems that, indeed, walrus walk on their teeth, at least sometimes. The Latin name of the species, Odobenus rosmarus, is actually a very tell-tale name, meaning “tooth-walking sea horse”.

Walruses sport a large body and they are usually pink or dark-colored. Their fur is thin, but has extraordinary insulation properties – combined with the thick layer of fat underneath (in some cases as thick as 6 inches), this fur makes sure the walrus is never cold. They weigh between 600 and 1,500 kilos and can reach the length of 3 meters or more. Males are usually twice the size of females and their tusks are also longer and thicker, in some cases reaching the length of 1 meter. The tusks serve multiple functions – they are used by the animal not only to get out of the water, but also as tools to obtain food, being the animal’s only functional teeth. Other than that, the tusks are used as weapons against other walruses and intruders and as a measurement device to establish hierarchy among males.

Walruses are carnivores, but their bulky bodies make them clumsy, so they prefer to feed on shellfish. They like shallow waters, where they can forage the sea bed and avail themselves of the mollusks, tube worms, sea cucumbers, shrimps and crabs they live on.

Walruses live until the age of 20-30. Females reach sexual maturity around the age of 4, while males become adults around the age of 7. However, males start mating only around the age of 15.The walrus mating season lasts between January and April, with gestation lasting 15-16 months. They are capable of delayed implantation, being able to postpone birth if circumstances are not suitable. Calves are born between April and June – they are fully developed when they are born, they can swim and they weigh between 45 and 75 kilos. They are nursed by the mothers for more than a year, but they usually stay with their mothers for another four or five years.

Walruses live in large colonies that, in some cases, consist of several hundred thousand individuals;
They can sleep for 19 hours and they can also stay awake for more than three days, if they have to;
They are extremely able divers, sometimes going down to deeper than 100 meters in search of food;
They have only two predators: polar bears and killer whales;
They usually feed on small creatures of the sea, but they are known to attack seals occasionally.

As you can see, walrus walk on their teeth sometimes, indeed, but there are so many other fascinating facts about them worth learning!