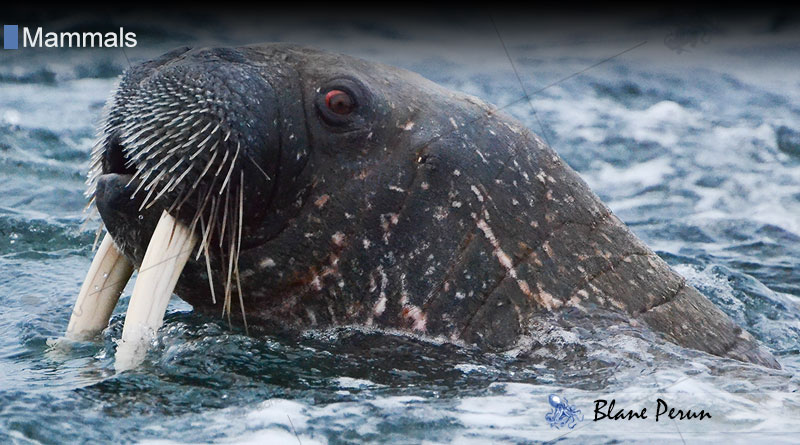 The walrus is a massive, tusked marine mammal with flippers that lives in various icy regions surrounding the North Pole. They are easily recognized by the massive tusks that serve to immediately differentiate them from the otherwise similar-looking seals that they often share their habitat with. Despite being known for their size, they are not the largest pinnipeds. That honor belongs to the lesser-known elephant seal. The walrus is a keystone species in the arctic regions, where it serves a number of important ecological functions.

The walrus shares many traits with its seal and sea lion cousins, although its swimming manner stems more from seals than sea lions due to the emphasis on whole-body movement rather than its flippers. The walrus tusk is its most defining feature, and males with the largest tusks are often the most important in their social group. The walrus is unique among carnivores for its widespread eyes as most carnivorous creatures have eyes placed squarely on the front of the head. These are designed to make targeting and focusing on prey easy for the carnivore, a task that the walrus does not have need of on the seafloor.

Walruses are shallow divers that forage off the seafloor. They prefer not to dive as deep as other pinnipeds are known to, but rarely have to because of the widely varied and opportunistic diet that walruses have adopted. Walruses will eat shrimp, tube worms, crabs, soft corals, sea cucumbers, tunicates, and various mollusks off the seafloor during their foraging trips that can last up to half an hour. The walrus is known to prefer clams, using t’s powerful lips to break open shells and eat the meat inside.

Walruses rarely live past thirty years of age, and typically begin mating at fifteen years. Females will begin heat twice a year, at the end of summer and around the month of February. Interestingly, males are only fertile during the February mating season, and not the second, later summer one. During heat, males compete over the mating rights to ice-bound females who, upon choosing a mate, will jump off the ice and join them in the water. Gestation lasts up to sixteen months, and walrus calves are born during the annual spring migration, between the months of April and June.