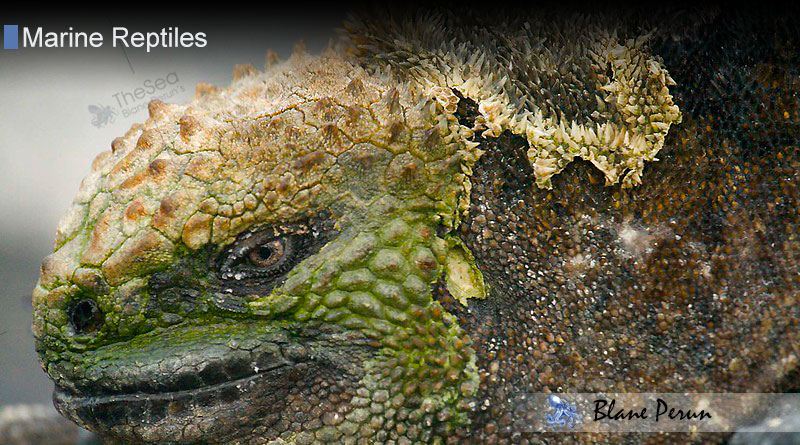 The marine iguana is an unusual reptile that lives and feeds in the waters of the Galapagos Islands. It is the only modern lizard that has the ability to forage for food in the sea. When not swimming, it spends its days basking in the warm sunlight of the Galapagos rocks. Upon his journey to the islands, Charles Darwin first described the marine iguana population, calling them, “imps of darkness” for its appearance and black coloration. Other colors exist as well, and it is not unusual for bright green or teal-colored specimens to be seen on the island’s rocks.

The marine iguana finds nearly all of its food in the sea. It is very uncommon for the iguana to hunt or forage on land, because it prefers to eat seaweed and algae. It features a wide, flat snout along with sharp teeth that allow it to scrape algae off of sea rocks. Since this feeding process results in an excess of salt ingested by the reptile, it also has an unusual nasal gland that lets it filter out the salt, often resulting in patches of white salt lining its face.

As a cold-blooded creature, the marine iguana cannot spend a great deal of time in the cold waters foraging for food. After a diving session, it must bask on the warm rocks until it gets its internal temperature up to a more comfortable level. During this time, its exhibits sluggish movement and is highly vulnerable. Generally, the marine iguana moves in a clumsy manner on land because its physiognomy is designed to lend it graceful swimming abilities. When on land, these iguanas are highly defensive and will bite any potential nearby threat.

Just like the other animal species of the Galapagos Islands, the marine iguana is totally protected by the state of Ecuador. It is illegal to hunt, own, or otherwise disturb the marine iguana population of the islands in any way. They are considered, “vulnerable” by the IUCN because of introduced predators to the islands for which the iguanas have no natural defense. Occasional lack of food resulting from natural storms such as El Niño has drastically reduced the marine iguana population in the past, and conservation efforts continue to this day.