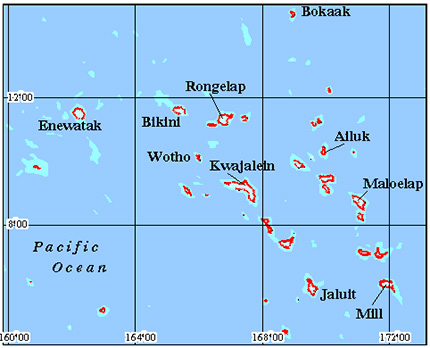 The Marshall Islands represent one of the four “atoll nations” in the world. There are two island chains of 30 atolls and 1152 islands of low coral, sand and limestone.

The coral reefs in the area are pristine environments, very little touched by the aggressive hand of man. The marine landscape here is amazing, the water has great visibility and a diving tour will reveal some of the most incredible coral gardens ever seen. The most common coral species found in the Marshall Islands are Isopora palifera, porites Lobata-australiensis and Porites lus, but, in lagoonal sites, visitors will be glad to admire high concentrations of rare branching Acropora species.

Soft corals are rather rare in most areas of the Marshal Islands, but, in Mili, Lobophyton and Sarcophyton corals are relatively abundant.

As to what marine life is concerned, the coral reef in this region gives home to over 800 species of fish and over 250 alga species, as well as various mangroves, macroalgae and fleshy seaweeds.

Although diving is possible in Bikini and Rongelap atolls, the best dive area is the Majuro atoll. Diving here means the chance to discover the color and beauty of 250 species of hard and soft corals and the marine life they give home to: anemone, resting turtles, silvertip sharks, butterfly fish, triggerfish and the elusive octopus.