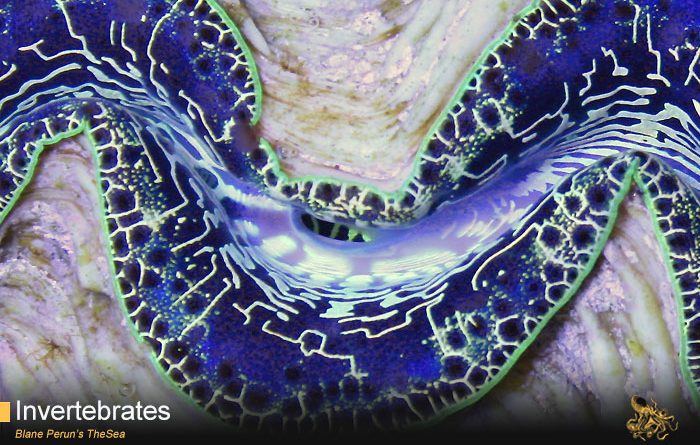 The maxima clam, also known as the small giant clam, is a species of sessile mollusks common across the Indo-Pacific region. Their preferred habitat is on coral reefs – they usually live in well-lit areas, attached to the upper part of corals or in the sandy substrate.

Maxima clams are relatively large, reaching the length of 20-30 cm when they are fully developed. They are bivalves, meaning they have two valves, one on each side of their mantle. The valves are used for drawing in water for filtering it for food and oxygen. The shell of maxima clams is quite large and is attached to the substrate with long and strong filaments that protrude from inside the shell, through a hole next to the shell hinges. The mantle of the clam is green, bright blue or brown to provide optimal conditions for the symbiotic algae to carry on with the photosynthesis as well as to protect the clam against the harmful effects of strong solar radiations.

Maxima clams use the zooxanthellae algae they live in symbiosis with as a source of energy. While the symbiotic algae engage in photosynthesis, they also produce waste that is a valuable food source for the clam. Maxima clams are filter-feeders, too – they pump water, drawing it into their body and filtering it for phytoplankton and oxygen. Unlike many other members of the bivalvia phillum, maxima clams are not voracious, they feed regularly, but not all the time.

Maxima clams reproduce by means of broadcast spawning – when the water is sufficiently warm, usually at the end of spring, the clams release their gametes into the water. The process is started by the males, and then the females follow by releasing their reproductive fluids, usually between one hundred thousand and one million eggs at a time to increase chances of fertilization. The fertilization takes place in the water and results in eggs that hatch after about half a day into larvae called trochophores, tiny, saucer-like organisms that float in the water. The trochophores develop quickly – first, a pair of calcareous valves appear that later on transform into the shell, then the young clams continue their development for a few more weeks, during which they become able to host zooxanthellae algae. Afterwards, the now adult maxima clam individuals find a suitable spot of substrate and they attach themselves to their new home.