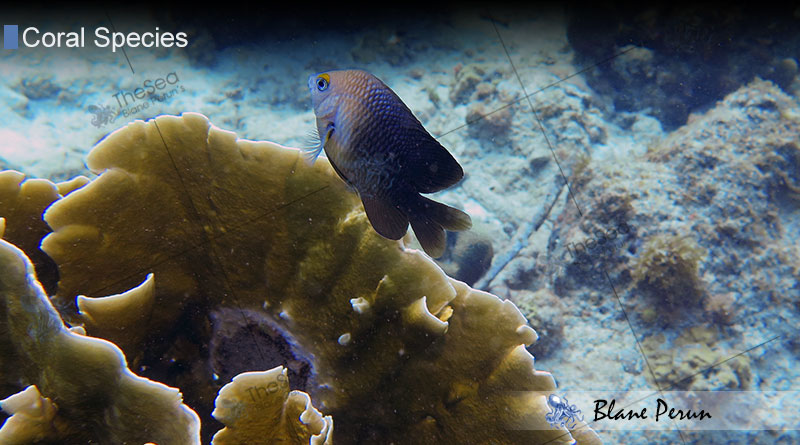 Fire corals are grouped into the category of Milleporas. The Complanata is a type of coral otherwise known as “blade fire coral” found in the Caribbean, Florida and Bahamas ocean waters. It is brown to light creamy yellow in color, with white branch tips. They inhabit shallow water reef tops, covering rock and dead corals.

Colonies form thin, upright blades or plates that extend from an encrusting base. Colonies can vary in size up to 50 cm. Outer edges of blades are uneven with multiple extensions or short branches. Though they appear stony, Millepora Complanata has a surface that is smooth, covered with minute pores within which the polyps live. When the tiny polyps protrude, they appear as tiny fine hairs.

Fire corals are commonly found in Caribbean waters, but can be found anywhere that the right conditions are present for a colony to thrive. Millepora inhabit shallow water reef tops that cover rock and dead corals. They are usually found in water that has some movement, down to 15 meters in depth.

Fire corals are well known for their ability to “sting” both their prey and any unsuspecting SCUBA diver or passing snorkler. Tiny fine hairs emit a protein based toxin which is injected by the nematocysts. While this toxin rarely causes more than discomfort, pain and blisters or rash to humans, it can paralyze tiny food sources for the coral and enable it to capture its prey.

Fire corals are relatively slow-growing coral and make great additions to your home or office saltwater aquarium. It’s important that Millepora Complanata get plenty of broad spectrum lighting, so it’s important to talk with an aquarium expert before implementing this into your home reef. They offer great protection for aquatic life within the aquarium.

Millepora Complanata are protected under the Coral Reef Preserve Act of 1966. The law states that there will be no removal or willful harm to any part of a coral reef within the coral reef preserve as set in the law. Fire corals are best preserved by leaving them in their natural habitat and enjoying them exclusively through SCUBA diving and snorkeling.