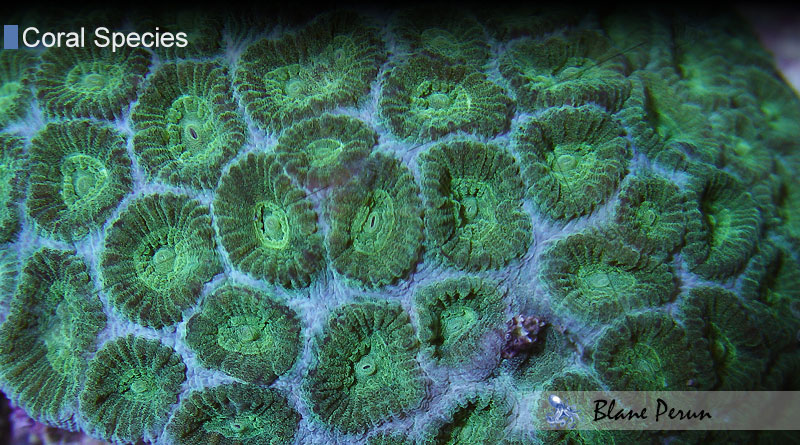 Montastrea is a genus of stony corals which belong to the family Montastraeide. These corals are also known as boulder star corals or great star corals. Up until 1994, it was thought that only one species, M annularis, existed, but the anatomical variability was hard to explain. So far, several M. species have been described.

Until 1994 it was thought that the wide variability present in the Montastrea annularis colonies was due to environmental conditions, as can be seen in many other stony corals that exhibit differences in size, color or form. A group of scientists eventually discovered that these colonies were actually made of up to 3 distinct species from the same genus, explaining the variability. The colonies are usually massive and dome or boulder-shaped, with sizes ranging from ½ meters to 1.5 meters, with several colonies being much larger. The colonies are usually fluorescent red or orange during daytime. These colors are associated with the cyanobacterial protein called phycoeryhtin. The polyps are large and in some cases they can grow as large as a human thumb.

Most of these species can be found in the Atlantic Ocean, with a large concentration and variety in the Caribbean Seas. Colonies can be usually found at depths ranging from 12 to 30 meters. These species usually prefer well sunlit environments which allow the symbiotic zooxanthellae to create organic carbon through photosynthesis.

There are several described species. As mentioned above, until recently, it was thought that M. annularis exhibited large morphological variety due to different environmental factors. It was proven that those colonies were actually a combination of M. annularis, M. faveolata and M. franksi. There are other species such as M. cavernosa which grows in colonies of 1.5 meters in diameter, with some colonies being formed of plates.

Members of the Montastrea genus can feed through heterotrophy, extending their polyps and tentacles during the night to capture water with dissolved nutrients or bacteria, small zooplankton, etc. However, in many species, most of the nutrients come from the symbiotic zooxanthellae which produce carbohydrates through photosynthesis.
These corals don’t just host photosynthetic dinoflaggelates, but also cyanobacterioa, which are, too, capable of photosynthesis. They have red pigments similar to chlorophile called phycoeryhtin. This pigment is thought to be more efficient at capturing light at greater depths, especially since the more water the light has to go through, the less it ends up on the photoreceptors. Red light has longer waves that blue light and thus these cyanobacteria are more efficient at absorbing it.

Reproduction in the case of these boulder star corals can be sexual and asexual. Like most other stony corals in the tropical waters, these species can reproduce asexually by forming buds either internally or between polyps, or externally. When storms rip fragments of the colony, these are swept away and can generate a new colony through a process called fragmentation. Sexual reproduction is achieved by releasing jets of sperm and eggs to be fertilized in the water column. Fertilized eggs become planula larvae which settle on the ocean, become fixed, and extrude a calcium carbonate exoskeleton that will represent the start of a new Montastrea colony.