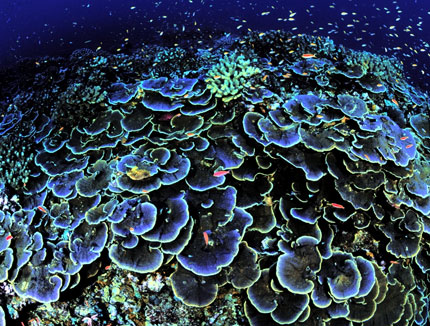 Montipora is known as an easy coral to grow and maintain in reef aquariums. The coral is a genus in the rank of species called phylum Cnidaria. The species are capricornis and dilatata. Considered a good beginners coral, they grow into the shapes of ridges and plates and commonly appear as bowls or flowers to the eye.

This type of coral grows outward and can harmlessly spread over surrounding rocks, debris and shells. Montipora ranges widely in color including pink, brown and green. Some has bright colors and differing color ranges over its ridges offering a contrast with the base of the coral. When properly taken care of, even small, two to three inch ridges of montipora can grow into basketball size corals. The coral can be found in many natural reefs including many of the reefs off the islands of Hawaii, including Kaneohe Bay, Oahu and the Northern Hawaiian Islands.

As most corals, montipora is composed of colonies of individual polyps that share a common center called a nerve net. The colonies are typically about two mm across and share tissue. When left alone, the polyps will expand and protrude in water movement, but when disrupted they will retreat into the coral. In the evenings, they are known to branch out and collect zooplankton from the water. A proper environment for photosynthesis is critical for montipora the coral has a symbiotic algae called zooxanthella that inhabits the coral cells and produces energy. The process of photosynthesis is the main element that produces the important energy to make the zooxanthella.

Montipora are usually found in bright sunny shallow reef environments that have moderate wave motion. Some fish, like hawkfish, live in or near the colonies. Hawkfish are narrow long fish that make their homes among the ridges. Unfortunately, the existence of montipora is dwindling. This type of coral is not resistant to coral bleaching as other coral species, like Acropora. Coral bleaching occurs when the photosynthesis process is not occurring enough to provide the energy to the coral which gives them their color.

Montipora is also not as resistant to other stresses like changes in water temperature or water chemistry. With coral bleaching, once the process starts it is difficult to stop the process. If the colony lives, it can take months for it to regain its normal density. In a reef aquarium, improper lighting can cause coral bleaching to occur and kill the montipora.

Montipora corals respond well to metal halide lighting. This type of lighting is compact and powerful which is good for reef aquariums. In a well light and properly maintained reef aquarium, and can grow large, healthy and beautiful.