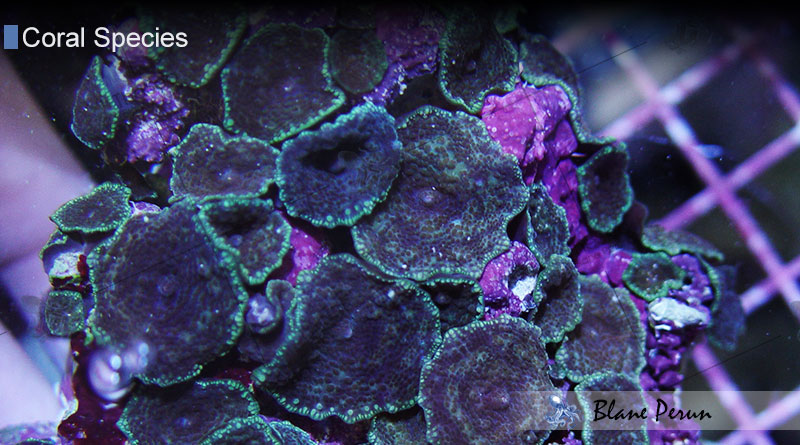 The Mushroom Coral (Fungia scutaria) is a specie of the Actinodiscus genus that populates the rocky reefs and seabed of tropical Pacific and Indian Oceans. The mushroom coral is also referred to as a Corallimorphs, Mushroom Anemones, or Disc Anemones because its composition is between the anemones and stony corals.

This smaller than average sized (1-3 in diameter) coral is relatively non-aggressive when compared with other invertebrates of the ocean variety. Like other soft corals, the mushroom coral does not have an exoskeleton and instead grows out from a rock when young. Using a limestone pedestal, it attaches itself to the framework of the reef, but will break off when they reach sexual maturity. From this point on, the mushroom coral lives unattached on the ocean seabed with its mouth side up (this position is extremely important to ensure the coral receives enough nutrients.) If the coral gets overturned during a storm or extremely strong current, the mushroom coral has the exceptional ability to right itself. The corals gut cavity enlarges on only one side of its body, with the imbalance acting as a wedge to raise the coral higher and higher until it tips over onto its proper side, a process that takes place over several hours.

A short stem branches the mushroom coral out from the rock, barely visible before the round or wavy cap tops off the stalk. There single polyps on a mushroom coral, from which tentacles are attached. These tentacles serve a variety of purposes in both feeding and self preservation. The mushroom coral is a carnivore, trapping small animals for nutrients by pointing its tentacles in a vertical fashion and snagging them as the ocean currents bring them by. A slit-like mouth exists in the center, with rows of hairy cilia on the surface that act as a conveyor belt delivering particles from the sea water into the mouth. The cilia also work in the opposite direction, removing sand and other debris to be disposed of. In addition to this method of eating, the coral is also a symbiotic creature, extracting small algae known as zooxanthellae from the creatures it snags in its tentacles, then hosting under its skin for photosynthetic energy.

Mushroom corals run the gamut of colors and textures- some or monochrome, others brilliantly multicolored, both smooth and bumpy, and some even have delicate knobs, small spots or bold stripes. The wide variety of mushroom coral colors depends mostly on the environment they are living in- how much access to sunlight they receive daily, the frequency and strength of the ocean currents, and neighboring creatures.

Very few subtypes of mushroom corals have been named, ironic considering the prevalence of the species. Although the mushroom coral does not grow in colonies like most soft corals, they do grow in clusters on natural reefs, so closely together that various types overlap one another. When the mushroom coral becomes overly stressed, it will withdraw in on itself, appearing to shrivel up into a lifeless blob.

The mushroom coral reproduces in many different ways (both asexually and sexually)- budding being one of the most frequently used processes. When a small coral breaks off from the reef to live along the sandy ocean floor, there is leftover tissue that remains on the original limestone pedestal. This tissue buds into a new mushroom coral. Mushroom coral also produce sexually through spawning- adult corals release eggs or sperm into the ocean which unite to develop a planula. The planula drifts along with the ocean currents until it settles on a different coral reef and begins to create a polyp, which is the basis of life for mushroom coral.