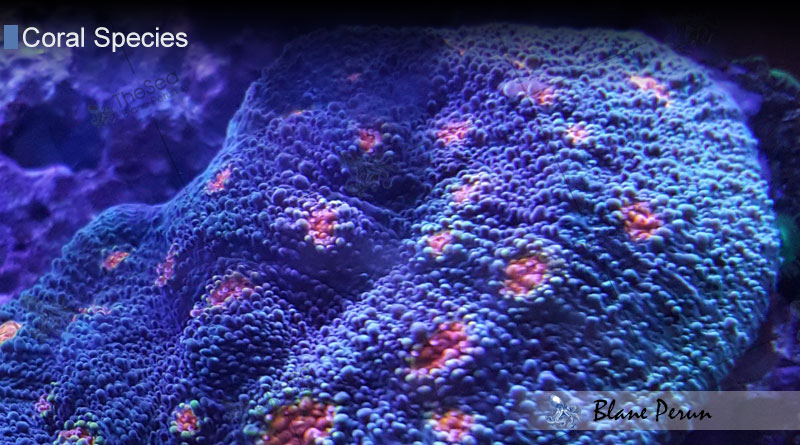 Mycedium has increased in popularity recently because it forms such interesting shapes, has raised corallites that give it much texture, and often has very bright colors that can really stand out in saltwater aquariums. The hardiness of mycedium is average in terms of difficulty to keep in an aquarium setting, and benefits from variable medium water flow.

The Mycedium coral is a large polyp stony (LPS) type of coral, and is often referred to as the Green Eyed Cup, Plate, or Peacock Coral. A blue to green base color with bright green polyps is a standard amongst Mycedium coral. The genus name combines the two Greek words mykes (mushroom tops) and idion (diminutive) giving a liberal translation of small bumps.

The diameter of each individual Mycedium polyp can range from less than 1/8 inch in newly-formed colonies, up to a 1/2 inch in mature colonies that have reached sized exceeding 6 feet. The morphology of the colony adapts quickly to any niche in which it finds itself. Its peaceful nature and adaptability allows it to grow into a number of different shapes, including the common flat fan shape.

Variable medium water flow is best in tanks where Mycedium are present, and typically do well with medium lighting. Mycedium usually form either plates or cups, and they should be placed horizontal so that the polyps face out and are perpendicular to the sides of the aquarium. This type of coral does not feed much. Cyclops or Mysis should serve as adequate food for mycedium.

Mycedium can be easily propogated by properly fragging the colony. Providing strong water flow to the mother and daughter colonies will help, and any infection should be dipped in an iodine solution. The coral is not too aggressive, but feeder and defensive tentacles do come out at night. The tentacles are not long, so corals further than an inch away should not have any problems coexisting with other corals in a marine aquarium setting.