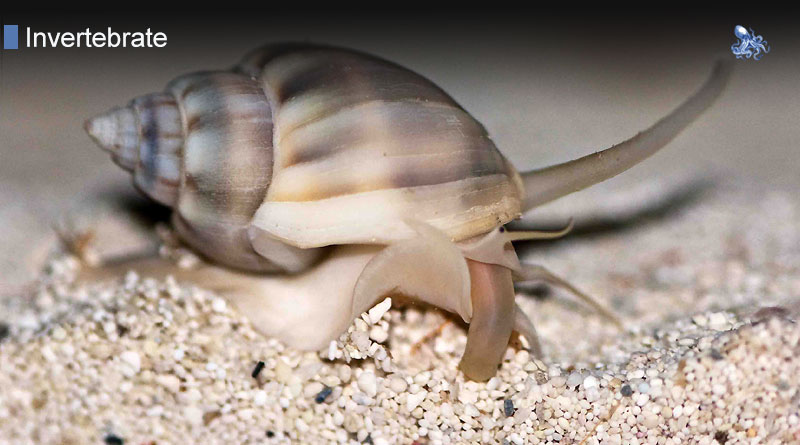 Nassarius snails – also called nassa mud snails – are small, but extremely efficient and hardy scavengers. The genus of marine invertebrates comprises over 800 species. They are common in all the seas and oceans around the world – wherever there are sandy or muddy, flat areas on the substrate, these little creatures will appear and thrive.

Nassa snails vary in size from very small to medium, usually growing to 1-3 cm in length. The spiral shell of the snail is tall and oval-shaped, resembling an olive pit, and usually has a grey, light brown or tan color. It is also textured – nassarius originally means wicker basket in Latin, and the texture of the snail’s shell features striations that resemble woven baskets, indeed. The snail has a long siphon protruding from the shell and it also has long eye stalks, but when disturbed, the entire body, including the siphon and the horns, withdraws into the shell that becomes instantly sealed with a protective cover called an operculum. Unlike other marine snails, nassa snails are quite fast, moving along effortlessly with the help of a muscular pedal flap.

These snails are scavengers, but unlike other species of marine snails, they don’t eat algae, feeding exclusively on the detritus they find while roaming on the sea bed. They are known as very efficient cleaners of the sea bed, consuming carrion such as decaying fish or crabs. They are shy animals, too, spending a lot of time buried in the substrate with only the long, tube-like, scent-sensitive siphon sticking out from the sand or the mud, waiting to catch the smell of food – when they do catch the smell of food, they rise from the sand quickly to pursue their meal, behavior that gives these creature the nickname zombie snails.

Male and female nassa snails look identical and there is very little information about their reproductive habits, but it seems that mating takes place with one individual climbing on another one, inserting a tube-like organ into a hole on the body of the other. Incubation is very short, it takes only a few hours, in some species even shorter, after which the females lay tiny, capsule-like egg sacs on rocky areas of the sea bed where the eggs enjoy more protection than on the open sea bed. The eggs hatch into larvae that feed on phytoplankton for about a month, after which they turn into tiny nassarius snails.