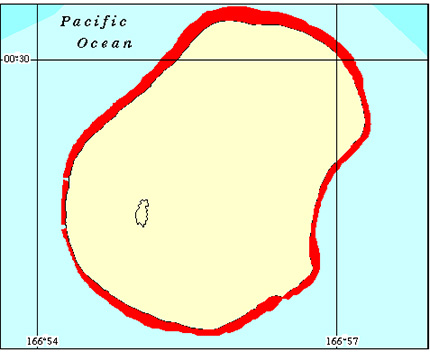 Nauru (Republic of Nauru) is the smallest nation in Asia, an independent, tiny, oval island, situated in the deep waters of western Pacific, close to the equator. Its origins are volcanic, with a coral cliff that rises to a central plateau, which goes to almost 70 m above sea level and represents about 80% of the island.

Nauru is known for its very diverse coral reef ecosystem, although there are still many things unknown or insufficiently documented about its biodiversity – hence, there is always room for exploration and new discoveries.

Nauru’s coral reef area spreads over 7.5 square km and boasts many coral species forming gorgeous submerged gardens, including: Porites australiensis, P. heronsis, Fungia spp., Pocillopora eydouxi, Millepora spp., Acropora spicifera and A. palifer. Divers visiting the reefs surrounding Nauru will get to encounter tuna fish, rainbow runners , mullets, topsail drummers, coral cod, and the Humpheaded Maori Wrasse. The luckiest visitors may even have the chance to see the rare spiny lobsters or even giant clams, which are so shy to show themselves that some believe they may be extinct in this area.

The popular diving spots for those who want to admire the corals and the marine life surrounding them include Anibare Bay, which has the highest levels of live coral cover, and Anetan Bay (also known as Blues Point), where there is more than 65 percent live hard coral cover.