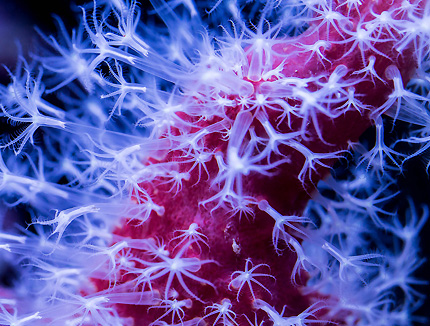 Nephthyigorgia is a beautiful, brightly colored soft coral genus, a member of the family Nidaliidae. The exotic-looking brilliant coral is often referred to as the chili coral, and it also goes by many other names that make reference to its graceful and brilliant appearance, such as red finger soft coral, chili cactus coral or strawberry coral.

These beautiful soft corals originate in the waters around Indonesia and around Fiji, but they are found in many other areas of the Indo-Pacific region as well. They prefer areas that have medium to strong currents and are properly shaded, featuring relatively low light intensity. Like many other species of soft corals, chili corals also suffer when they are exposed to direct sunlight, suffering that can lead to the coral’s eventual death. When the conditions are right, they form small colonies with colors varying from red and orange to purple, usually in shades similar to chili peppers left to dry out in the sun. The colonies are usually low-rising, staying under 6 inches in height.

The chili coral is a soft coral, being characterized by the physical features of soft corals. Compared to stony corals, soft corals contribute to the building of the reef to only a much smaller extent and they do not secrete calcium carbonate skeletons. However, they also have some sort of bony protection in the form of sclerites, tiny skeletal components with spines to provide the coral support.
The entire surface of the chili coral is covered in tiny polyps that are all interconnected through a tube system, a kind of internal plumbing system that distributes nutrients and water to all the polyps. There are two polyp types:
Autozooid polyps, which have eight septae and eight tentacles and have the role of capturing food with the help of the tentacles;
Siphonozooid polyps, which have shorter tentacles and a mouth and fulfills the role of pumping water into the coral in order to provide with sufficient oxygen.

Unlike most other corals, these bright red corals do not photosynthesize. While other species receive the nutrients they need from the zooxanthellae algae they entertain a very close, symbiotic relationship with, chili corals do not have zooxanthellae algae and they cater for their nutritional needs through filter feeding. Chili corals feed mostly on plankton, but they also capture other food particles that float around them and they are known to occasionally catch microscopic shrimps as well. They are nocturnal creatures, extending their tentacles to feed only during the night and staying motionless during the day.

Chili corals can reproduce both sexually and asexually and they are even able to regenerate very efficiently after they have suffered fragmentation. Asexual reproduction happens by means of budding, while sexual reproduction takes place through spawning and the external fertilization of the eggs, which transform into Nephthyigorgia larvae and, later on, settle on a suitable spot of substrate.