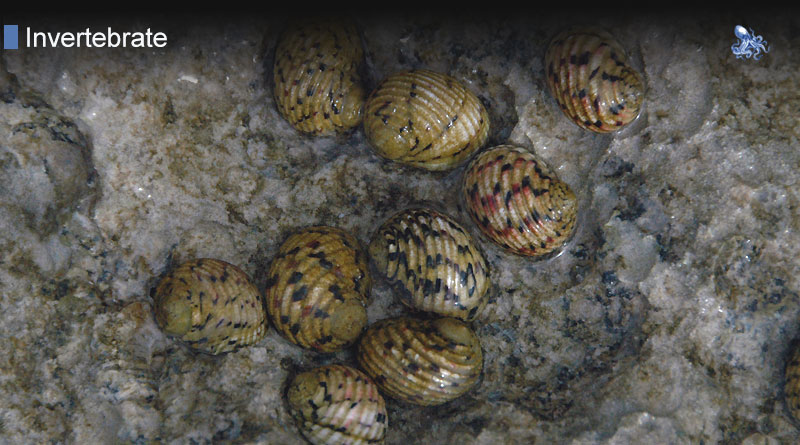 “Nerite snail” is the name given to a family of medium-sized marine snails widespread across the southern hemisphere. They prefer intertidal, shallow waters where algae are plentiful and the water is well-oxygenated. The family was named after a Greek sea-god, a handsome young deity who was the lover of Aphrodite, but refused to join the goddess in Olympus and was transformed into a shell-fish as punishment.

Nerite snails are short-lived creatures – most of them don’t live longer than a year. They are very peaceful, moving slowly on the substrate, looking for algae-rich waters. All the species that belong to the family are small, usually not larger than 2.5 cm. The shell of nerites varied in terms of both patterns and coloring – they can be black, yellow, orange, red, olive-green, with at least two of these colors organized into stripes, stains or dots. The shell can be round and smooth or spiraled, striated or having horn-like protrusions. These snails are varied when it comes to the color of their body as well, red, black, brown and tan being the most common body colors. Nerites have gills and an operculum, a lid-like structure that the animal uses like a door to close the entry when it withdraws into its shell.

Nerites are voracious, looking for food and eating all the time. Their diet consists almost entirely on algae, but they are not choosy when it comes to food – they eat whatever algae they can find and they are also known to consume particles coming from marine plants. While feeding, they pump water through their gills or they ingest algae with the help of a tongue-like organ called the radula.

Nerite snails are probably sexually dimorphic, though male and female individuals are impossible to distinguish based on physical features. Both sexes are needed for reproduction. After fertilization (that can take place any time as nerites don’t have a specific mating season, procreation being dependent on the existence of ideal conditions), the female lays individual eggs among the leaves of marine plants and in the crevices of rocks where the eggs are sheltered against strong currents and predators. After a short incubation period, the eggs hatch into larvae that look nothing like an adult nerite snail, but they soon grow tiny shells and start resembling their parents.