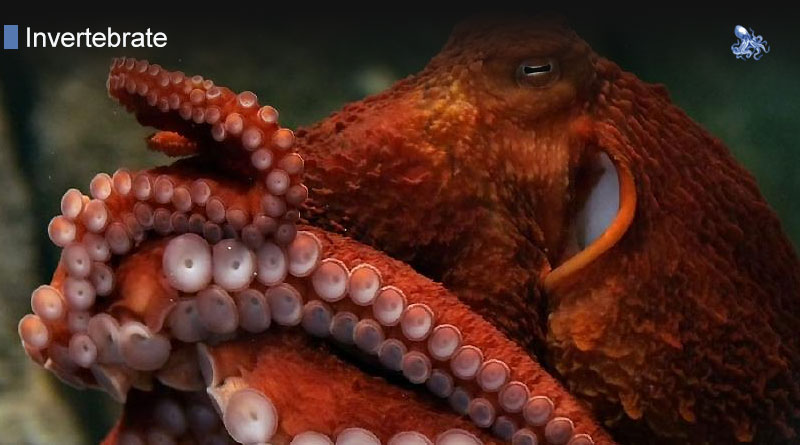 The North Pacific giant octopus is a large cephalopod found mainly along the coast of California, British Columbia, Alaska, Kore, Japan and Russia. These creatures prefer shallow waters just as much as deep-water areas – they are just as common in the intertidal areas as at depth up to 2,000 meters.

These creatures are marine giants, indeed – they are actually the largest species of octopi, weighing up to 70 kg and measuring up to 6 m with the arms extended. Like all cephalopods, these octopi also have bilateral symmetry. They have eight arms, each arm with two rows of suckers used for adhesion. The arms are connected by webbing that can be extended into a parachute-like form used by the octopus to capture its victims. The mantle of the animal is spherical and it accommodates the internal organs as well as the chromatophores, small sacs that contains pigments used by the octopus to change color for camouflage purposes. Like most other octopus species, the North Pacific giant is also able to modify the texture of its skin and has an ink-sac to deter predators.

The giant octopus is a predator, feeding mainly on fish, lobsters, shrimps, scallops, crabs and abalones, sometimes even small sharks such as the spiny dogfish. The octopus catches its prey with the strong arms, then it bites the victim, releasing a paralyzing toxin into the prey’s body.

This giant octopus species is not only large, but long-lived, too, its average life-span being 3-5 years. During mating, the male octopus transfers an almost one meter long sperm packet into the body of the female with the help of a specialized arm. The female then stores the sperm packet inside her body until she considers the circumstances suitable for fertilization, sometimes for longer than half a year. She fertilizes the eggs inside her body, using the sperm sac, and then she lays a huge number of eggs, usually between 100,000 and 400,000, on a hard surface on the substrate. Very few of them survive until hatching and even fewer make it to adulthood. She guards the eggs until they hatch, which can take up to 6 months, period during which she does not feed. Female individuals reproduce only once during their life and they die one or two months after their eggs hatch. Young North Pacific giant octopus individuals develop very rapidly, starting from the size of a grain of rice and growing at a daily rate of 0.9%.