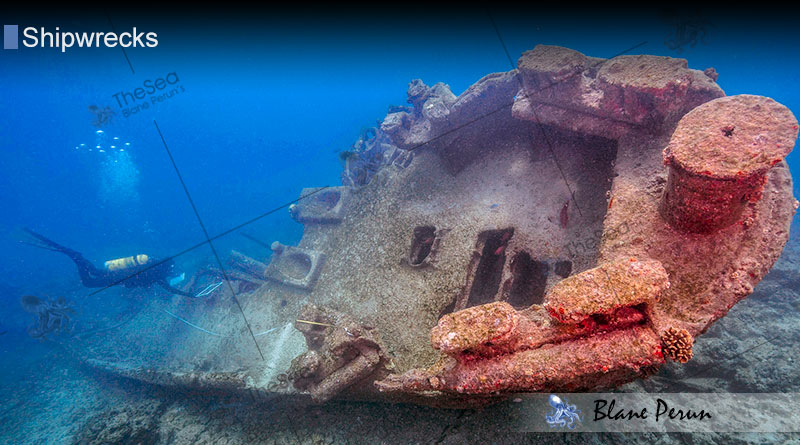 ships were built and especially the items found on them can tell a lot about the period in which they operated and establish the cause of the wrecking. The items that they carried during their voyages can also tell what they were built for, as well as their trade routes. Many of these underwater shipwrecks are considered cultural heritage sites by UNESCO.

In most cases, after a century or so, very little remains of a sunken ship. Most objects that are salvaged are heavier elements such as metal. The ship’s anchor, chains, coins and in some cases, canons as well are some of the objects that can usually be salvaged and displayed in a museum. The ship’s origin, manufacturer, how it was built and the materials used to build it may be identified. The ocean is unforgiving and, like wooden ships, later ones made of metal will also disintegrate over time; however, the process may take a bit longer.

No one is quite sure about the number of shipwrecks that can be found on the ocean floor. In 1999, Angela Chrome, a science writer for the Daily Telegraph that specialized in underwater archaeology in her later years, estimated that approximately 3 million shipwrecks are lying on the ocean floor. However, a large percentage of these wrecks remain undiscovered.

Improper design, human error, and natural disasters are some of the main causes of shipwrecking. Avoiding these disasters is another reason why studies need to be made so that proper precautions can be put in place to prevent them from happening again.

The wreck of the SS Yongala is a major tourist attraction in Australia, receiving more than 10,00 tourists each year. What makes it stand apart from the others is its abundance of marine life and the fact that even to this day, much of the ship remains intact and it is one of the largest shipwrecks that can be visited by tourists. After it was hit by a cyclone in 1911, the SS Yongala sunk and it remained undiscovered for half a century. The wreck is located about 80 kilometers to the south-east of Townsville.

One of the most famous shipwrecks is the RMS Titanic, the ship which the movie with the same name is based on. During her maiden voyage across the Atlantic in 1912, Titanic struck an iceberg causing the ship to sink. The reason why it was a great tragedy is that the ship was ill-prepared for a disaster, having enough lifeboats to accommodate approximately 40% of the passengers on board if the ship were at full capacity.

Following the tragedy, many changes were made regarding safety and recommendations were made by the British and American Boards of Inquiry. They have stated that ships should carry enough lifeboats to accommodate every passenger on the ship. Also, emergency lifeboat drills would be carried out, as well as regular inspections of the boats. The shipwreck of the RMS Titanic remains at the bottom of the Atlantic at 3.8 km underwater. It was discovered by an expedition led by Jean-Louis Michel and Robert Ballard in 1985.

Found on many lists about the top diving spots in the world is the USAT Liberty in Bali, Indonesia. The ship was a cargo vessel that managed to serve in both World Wars, as well as during peacetime until it was torpedoed by a Japanese submarine 1942. What remained of the wreckage was stripped by the US military and later by the locals. The ship originally ended up on a beach until a volcanic eruption in the area moved the ship into the water, where it remains a popular destination for scuba divers.