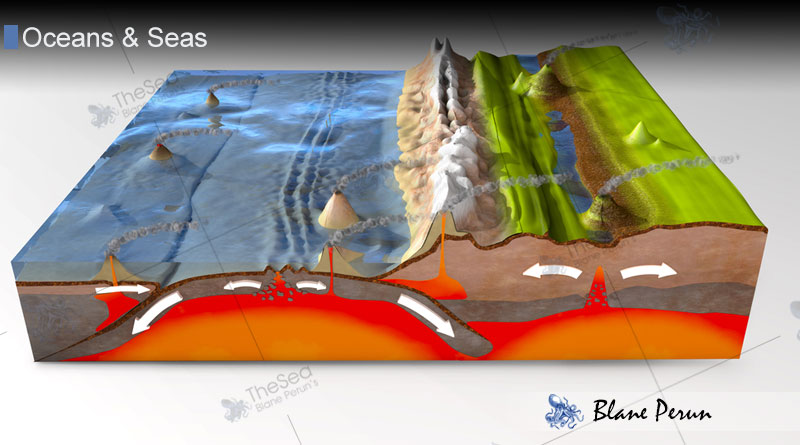 The mid-oceanic ridge is one of the most impressive structures on Earth. Stretching across the entire planet, it is actually barely visible due to the fact that it is almost entirely underwater. The ridge is extremely important from a geological standpoint, as well as in terms of its extensive size and the influence it has on a number of key ocean currents. Still geologically active, it is in a constant process of change and formation that has been in place for many millions of years.

The oceanic ridge is a global structure formed by underwater mountain systems that stem from the movement of plate tectonics. The ridges typically form with a rift that runs along their central structure, and a number of processes are responsible for the actual spreading of new ocean floors, resulting from the movement of the plates as they spread apart. For this reason, mid-ocean ridges are extremely significant geologically. Also, the ridges are often responsible for volcanic eruptions both underwater and at the surface, the mid-oceanic structure of ridges stretching across the entire Atlantic ocean and throughout the globe, being essentially the largest chain of volcanoes on Earth.

There are a number of interesting and significant facts that are important to note when it comes to the mid-oceanic ridge. First of all, the entire formation stretches across a distance of about 65,000 km, similarly to the seam of a baseball, and about 90% of it is completely submerged underwater. The average depth of the ridge’s crest is about 2500 km, although it can be more than 4,000 km deep (such as near the Cayman Trough) and it also rises above water in certain areas. The best example of the latter is Iceland – representing the tallest above sea level point of the ridge. While most of its volcanic eruptions generally go unnoticed because of its placement, the ridge does feature occasional, intense eruptions even in the areas where it rises above sea level.

Compared to the Earth itself, most of the oceanic crust is far younger, being formed from rocks that are roughly 200 million years old. Decompression melting in the Earth’s mantle leads to the mid-ocean ridge being in constant formation, with the rocks that form up the crust right below the sea floor being the most recent along the axis of the ridge. Here, due to the pressure of the magma, stones form in abundance, while the slow but consistent cooling of the crust results in the sea floor progressively descending as we move away from the center of the ridge.

The formation of the mid-oceanic ridge features two distinct processes: slab pull and ridge push. The latter is thought to contribute to crust formation, while the former is largely responsible for the spreading process observed at most mid-ocean ridges. The process called ridge push is seen to be dominant by most experts – although there are still many uncertainties regarding this issue – as the gradually increasing bulk of the ridge’s center continues to push the tectonic plates away from the ridge, usually towards an area known as the subduction zone.