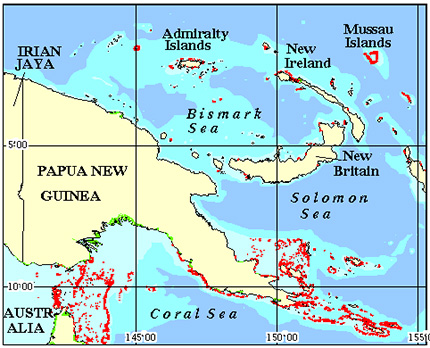 Papua New Guinea is one of the world’s major coral reef nations, with a vast area of reefs. The total area is probably considerably larger than the figure of 13 840 square kilometers provided here, as many reefs remain unmapped in the present work. Lying on the eastern edge of the great center of coral reef biodiversity in Southeast Asia, there is every indication that this country enjoys remarkably high levels of biodiversity. It has suffered very little in terms of human impacts and there are great opportunities for continued sustainable management and conservation of its resources.

Papua New Guinea consists of the eastern half of the island of New Guinea together with a large number of smaller islands. To the west the country shares a land border with Irian Jaya (West Papua), Indonesia. To the north of the mainland, the Pacific Ocean becomes enclosed as the Bismark Sea, bounded by the Bismark Archipelago to the north and New Britain to the east. East of New Britain and the mainland coast lies the Solomon Sea, further bounded by Bougainville Island in the east and the Louisiade Archipelago in the south. South of the mainland and the Louisade Archipelago is the Coral Sea, with the Gulf of Papua and the Torres Strait to the west. The islands of the Torres Strait are Australian, but come to within just a few kilometers of the southern coast of Papua New Guinea. In the southwest there are extensive coastal lowlands around the Fly River. Further north the mainland is divided by the long range of mountains known as the Highlands, reaching over 3 000 meters in a number of places and more than 4 500 meters at the highest point (Mount Wilhelm). There are further mountains along much of the north coast, divided at the mouth of the Sepik River. The offshore islands also show considerable relief. The northern coastline and all the islands to the north lie in a region of important tectonic activity where the large Pacific, Australia and Caroline tectonic plates come together, separated by a complex of microplates underlying the Bismark and Solomon Seas.

Papua New Guinea has a vast area of coral reefs, including fringing, barrier and atoll formations, but there is little information for much of the country and it seems likely that there may still be large areas of unmapped and possibly unknown reefs.