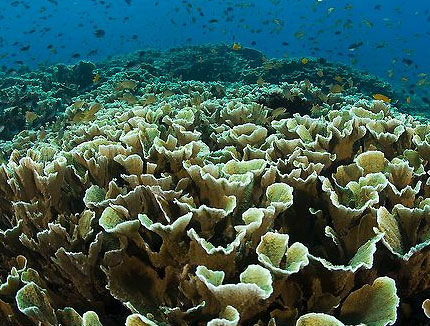 Found in the Indo-Pacific region, in the Red Sea and along the East coast of Africa to Japan, Pavona is a genus of corals that comprises a large number of sub-species of stony corals. Many live in large colonies in the shallow waters (maximum 15 meter deep), but some corals belonging to the genus have been found much deeper, at 25, even at 40 meter depths as well. There are currently 23 species registered as belonging to the genus, some very widespread, while others rare and close to extinction.

The sub-species present large variations in terms of shape, depending on the currents they are exposed to and the amount of light they get – some are massive, plate-like corals, others are leafy and there are column-shaped species as well. The species get different names that they derive from their shape – Pavona corals are known as Lettuce Corals, Potato Chips, Cactus, cabbage Corals and others. They are varied in terms of coloring, too, orange, purple and red being the most common colors, but tan and brown being widespread as well.

These stony corals prefer strong light and shallow, but turbulent waters – they do not thrive well in areas that get currents coming only from one direction because it prevents the polyps of the corals from extending, causing them harm.

All sub-species are hermaphrodites, with no distinction between males and females. They can reproduce sexually, by releasing gametes into the water for external fertilization, and asexually, too. While both propagation methods are used when in their natural habitat, in captivity, only asexual reproduction by division is possible.

These corals have multiple ways to obtain the nutrients they need. Like most other coral species, they live in symbiosis with zooxanthellae algae, which help the corals get most of their food, but they also obtain nutrients from capturing planktons with the help of their polyps. They tend to use direct feeding techniques more if they do not get sufficient light – when lighting is suitable, direct feeding is not necessary for them, which means that light is more important for them than nutrient-rich waters.

These corals are beautiful and resistant, but they are also very aggressive. Pavona corals have poisonous tentacles that they use to sting other corals and the life forms that approach them, a technique that makes them even hardier in their natural habitats.

Though these corals are quite resistant and widespread, they are still categorized as being endangered. They are extremely sensitive to temperature variation – even the smallest rise or fall in temperature can cause the corals to expel their zooxanthellae, which leads to a process of losing color called bleaching. Though bleaching is not in itself irreversible, it makes the corals more vulnerable and more susceptible to diseases.

Constant water quality is essential for these corals – sedimentation, acidification and pollution have already caused extensive damage to Pavona colonies.