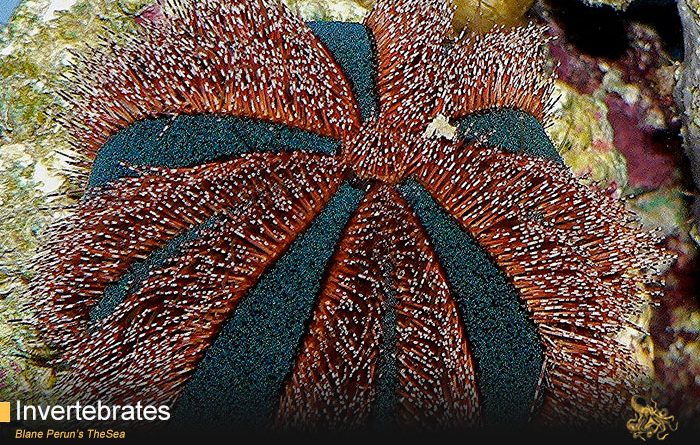 The variegated sea urchin, sea egg, green sea urchin and of course, the pincushion urchin, are just a few of the names that the species called Lytechinus variegatus in scientific circles is known by. This beautiful little sea urchin is distinguished mainly due to its round, colorful form and short, thin spines. It is an omnivorous urchin, known to eat both algae and the microfauna found on rocks, sand and carried around by the water currents. Also, the urchin is highly sensitive to the cleanliness and overall quality of the water it resides in, being easily affected by changes in salinity, temperature and various other factors that are crucial to its continual survival and thriving.

This sea urchin is completely round, and a large number of small spines cover its entire body to provide it with protection against predators. It is small in diameter, growing no larger than 3 inches across, and it is capable of carrying anything from algae and broken pieces of shells, to rubble, on its back for the purpose of camouflaging itself. One of the more curious traits of the organism is that it’s almost impossible to tell male and female specimens apart, unless you are an expert. This is a peaceful, usually solitary type of sea urchin, and its sensitivity to outward conditions causes it to hide during the daytime and suffer greatly from fluctuating water conditions such as changing temperature and nitrate levels.

This urchin is a peaceful creature, and it has a vital role on the coral reef food chain. It contains algae populations, and also feeds on sessile invertebrates, helping to keep the microfauna and flora of coral reef formations in balance. The pincushion urchin also has its own predators, mainly triggerfish and pufferfish. These fishes tend to pull off its spines in order to gain access to the urchin’s body and eat through it.

The main type of food on the menu for the urchin is algae. It can feed on algae and seaweed, but also on the microfauna growing on the reef. The sea egg is a grazer that tends to roam around at slow speeds on shallow seabeds looking for food. It can also damage the corals themselves, and it is believed to have an inclination towards consuming coralline algae. Finally, the pincushion urchin has also been known to feed on hard coral polyps in the event that it doesn’t have access to other food sources.