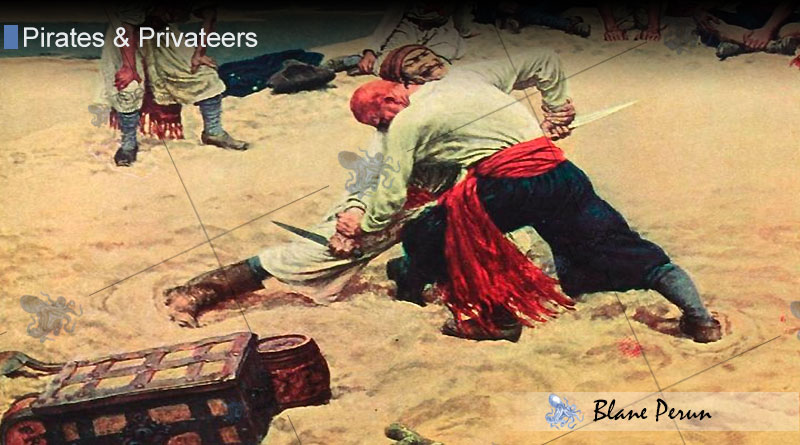 Although it’s “common knowledge” that pirates and hidden treasures often went together, historians and experts can tell you that pirates rarely buried treasure, most of them considering it to be simply impractical. Not only did the seamen fear that someone else might find the treasure and run away with it, but most of them would have considered the idea of making an actual map to lead opportunists to their lost treasure to be laughable.

There are many legends associated with the treasure that some famous pirates have amassed during the time they had spent buccaneering, smuggling and stalking unprotected trade routes. John Rackham and William Kidd were among the most well-known pirates who are said to have buried their large treasures due to their inability to keep hauling them around. On the other hand, there are many more pirates who were never known to have buried any of their “earnings”, but legends may have appeared and become inflated over time in certain cases.

Even though pirates rarely buried treasure, there are many stories that circulated for a long time about actual caches that may have been left by notorious buccaneers on unknown islands or even “hidden in plain sight” close to well-established colonies or cities. Many of these legends have been forged by attention-seeking pirate enthusiasts over time, while others were actually based on true facts, but distorted. In many cases, the final story became almost completely removed from reality, as most pirates simply preferred to leave their treasure in the care of trusted associates or create caches and hideouts that were well-hidden and in areas that would be easy to access. Novels like Robert Louis Stevenson’s “Treasure Island” from 1883 were among the major sources of legends about buried treasure, leading to the modern misconception about buccaneers, maps and “X marks the spot” sites.

One actually documented story about William Kidd trying to evade the authorities talks about his involvement with a man named Gardiner. Kidd had left the treasure in Gardiner’s care, but the latter was later tricked by Governor Bellomont into revealing the secret. Another well-known true story is that of Jean LaFitte, a pirate who used to attack merchant ships in the Gulf of Mexico together with his brother Pierre and who buried large caches of treasure between 1823 and 1830 in a gum tree grove in Lake Borgne, off the coast of New Orleans.

According to many stories, pirates that have, on rare occasion, managed to acquire large chests of gold, silver, gems and jewels were, in some cases, able to amass treasures that would be extremely valuable even according to today’s standards. William Kidd’s treasure stash is estimated to have been worth about $4.5 million, and the stories about William Thompson’s famous cache stashed on Cocos Island in Costa Rica point to a fortune that would now be worth more than $200 million. Despite all the mixtures of stories, half-true facts and legends, however – perhaps somewhat disappointingly – pirates rarely actually buried any treasure. X never really marked the spot – except in stories and novels.