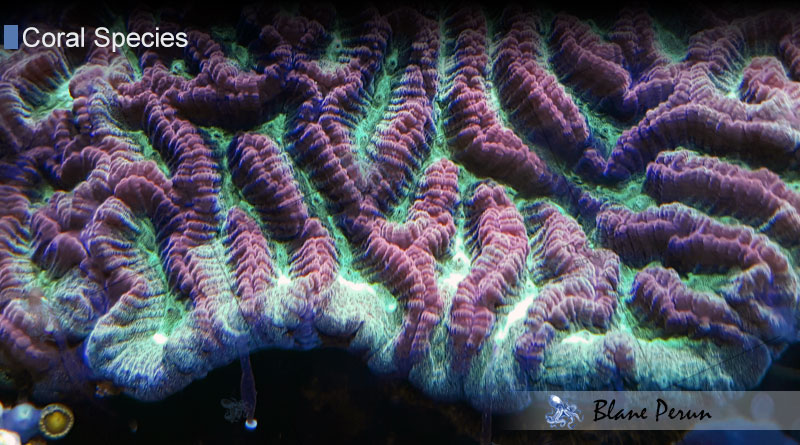 Platygyra is a genus belonging to the Merulinidae family of stony corals. These are often called maze brain corals due to their external walls and valleys which resemble the shape of a brain. These are some of the most recently evolved coral species, with many species being as of yet difficult to distinguish due to their varied habitats and thus region-specific characteristics.

The Platygyra genus has been described for the first time in 1834 by Ehrenberg. There are 26 species, 9 true species. Representatives of this genus are sometimes called by different names such as brain corals, closed brain corals, ridge corals or maze corals. These corals form huge colonies, many of which are shaped as domes or flat. The corallites share their walls, although, contrary to other corals, these walls are curved, forming twisted valleys and ornaments resembling the brain cortex. The septa of the corals do not have protruding walls. The coralittes walls have teethed septa. Typical colors for the walls are dark brown, pink, green, cream or even bright hues.

Maze brain corals can be found predominantly in the Indo-Pacific region. Habitats extend from the Red Sea to Madagascar, Indonesia and Australia. Some species also live off the coasts of Japan as well as near Sri Lanka and Papua New Guinea. Coral colonies can be found at depths ranging from 3 to 40 meters. These usually lie on reef flats or in backwater regions.

Notable Platygyra corals include P. lamellina, P. daedalea, P. sinensis and P. pini. P. lamellina is perhaps one of the most commonly found species, especially in the shallow waters. The shared corallite walls have twists and turns which can even encrust nearby surfaces. Its colors range from brown to gray or green, with mostly dark hues. P. daedalea is perhaps the most diverse in terms of habitat. The encrusting valleys are usually between 2 and 3 centimeters long. Colonies usually achieve 1 meter in diameter or even more. P. sinensis exhibits valleys that are much shorter and narrower than in the case of other species. Colors range from dull to bright, with wide range of color combinations. P. pini resembles P. sinensis with the difference that it has rounder and fleshier corallite walls with even smaller valleys. Colors vary from yellow to cream and brown.

Most of the nutrients are obtained from the zooxanthellae that live within the polyps. The polyps provide these tiny unicellular organism with elevation and thus more light while they get the light needed to perform photosynthesis which results in organic carbon. The corals may also feed by preying on small plankton organisms with their tentacles during the night when only these are extended.

These corals can reproduce asexually and sexually. The polyps are hermaphrodites release eggs and sperm during mass spawning events. Planula are formed through external fertilization and they will settle to form other colonies. Asexual fertilization can occur through intra- or extratentacular budding, fragmentation, as well as polyp bailout, meaning that the Platygyra detach themselves from the colony and form new ones.