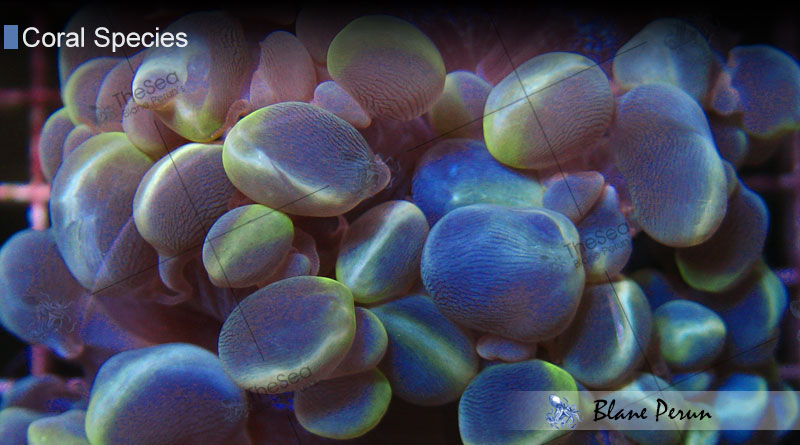 Plerogyra is a genus of stony corals belonging to the family Caryophilliidae. These corals have specialized tentacles which form vesicles filled with water that can reach 2.5 centimeters. Due to their appearance they are also called bubble corals.

The colonies of the bubble corals have the shape of an inverted cone. The skeletal structure is light and thin, with many individual branches. The polyps and the corallites cannot be seen in normal conditions due to them being covered by large vesicles that are filled with water. These are normally inflated during the day and deflated during the night. The corals also have tentacles that can be 2.5 centimeters or longer, with some specialized sweeper tentacles that can be as long as 10 centimeters, which are used to keep other coral species away. The water-filled vesicles are actually specialized tentacles. These give the appearance of a grape to Plerogyra colonies, earning them the name bubble corals or grape corals. The vesicles are usually colored in green or even dark brown, especially when exposed to higher intensity light.

Bubble corals live in the Indian Ocean as well as in the West Pacific Ocean. Some species have been found as far as the Red Sea. Species can be found even in the East China Sea as well as on the East, North and West coast of Australia. The habitat is usually composed of protected slopes or quieter areas such as near caves where water movement is relatively low. The large vesicles contain many zooxanthellae and so they need a large amount of light, a fact which makes these species more common in shallow waters. However, there are also species which live at greater depths.

Some notable bubble coral species are: P. sinuosa, P. flexuosa, P. simplex and P. discus. P. sinuosa has simple spheric vesicles which can have branches holding several polyps, while in the case of P. simplex each polyp is on individual branches. P. sinuosa vesicles are round while P. flexuosa has octobubbles or has a nipple-like top.

Plerogyra species can feed either with the help of zooxanthellae or through prey capturing. The green color of the vesicles is given by the zooxanthellae, which are present in concentrations much larger than observed in most other coral species. These vesicles hold a large amount of water, and they inflate during the day in order to increase the exposed surface and help the zooxanthellae produce carbohydrates, while during the night they deflate, allowing the tentacles to come out and catch zooplankton that swims too close.

Reproduction of this species can be sexual and asexual. There are distinct male and female polyps, and during mass spawning events, they release large amounts of sperm and eggs that result in fee-swimming planula larvae that can form other colonies. Budding and fragmentation has also been observed in this species. The Plerogyra species have also exhibited a rather uncommon form of budding – the coral connects and encrusts a nearby substrate, forms a new bud and releases it when it starts to grow into a new colony.