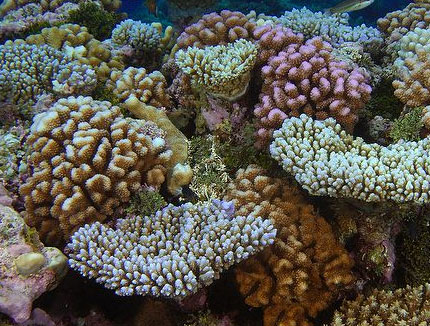 Also called brush corals or cauliflower corals, Pocillopora is a genus of hard corals living in the Indo-Pacific region. It is a large genus, comprising more than 15 species and one of the most widespread types of coral in the area. One of the reasons why they have become the dominant corals of many reefs is that brush corals easily attach themselves not only to the substrate, but also to objects floating in the water, getting carried across huge distances with the help of a technique called rafting. It is also the coral that has been studied the most over time, with scientists taking special interest in the genetics of the corals belonging to the genus.

All sub-species of the Pocillopora genus are polymorphic – that is, they vary in shape and size depending on the environmental conditions – but they are still easy to identify: they all have wart-like protrusions on their surface that makes them look like cauliflower, indeed. In some species, the protrusions are present only up to a certain age, though, after that transforming into small branchelets.

Brush corals build relatively large colonies that vary in shape depending on the environment and on the sub-species that form them. Mostly dwelling upper reef slopes, brush corals prefer shallow waters up to 20 meters in depth. The colonies that live in shallow, but turbulent waters tend to be short, low rising and dome-shaped, while the colonies found in calm waters are usually much taller and branching.

They are varied not only in shape, but in color as well – brown and green corals are the most common, but bright pink is not unusual either.

Pocillopora colonies are hermaphrodites and proliferate by releasing sperm into the water, sperm that finds its way into polyps and participates in the process of internal fertilization. The larvae produced are brooded by the parent polyp and then released into the water. The larvae will float in the water until they find a portion of adequate substrate to settle on and start growing into new colonies. Most species can reproduce asexually as well, by means of fragmentation.

The main technique of obtaining nutrients is by means of photosynthesis with the help of the microscopic algae that live in symbiosis with the corals. The polyps of the coral also direct-feed, using tiny tentacles to capture food floating in the water.

Though brush corals are very common and they grow relatively quickly, they are very vulnerable to mechanical damage – any cutting can result in irreversible deterioration; therefore over-harvesting is considered to be one of the major threats to the genus.
There are many other types of human activity that have negative impact on cauliflower corals: overfishing can throw over the balance of the reef eco-system, prompting macro-algae to proliferate in excess, which might kill corals. Climate changes also have a negative effect on the Pocillopora corals.