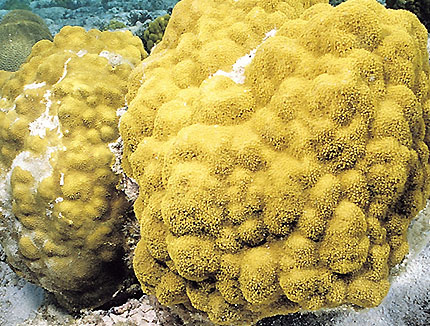 Slow-growing, long-lived and resilient, the coral species belonging to the Porites genus are widespread in the northern part of the Indian Ocean, in the West Pacific, around Australia and in the South China Sea as well. These corals are found in large colonies, in some cases they even form atolls of their own. Porites atolls are considered to be among the oldest forms of life currently existing on our planet.

They are colony-forming species, which means that small corals consisting of tiny polyps combine to build larger formations. The polyps secrete corallites, a hard skeleton of calcareous material that contributes to the formation of coral reefs.

Porites corals are also known as hump corals, deriving their name from their characteristic appearance. They form short branches which join together and form longer branches, which gives colonies their irregular shape. Hump corals vary in color, dark green and tan being just as common as brown, yellow or bright purple.

Hump corals prefer relatively shallow waters, up to 30 meters in depth; therefore, they are usually found on reef slopes. Most species thrive well in turbid waters and in calm areas as well.

In terms of feeding habits, hump corals are no different from other colony-building species. They derive the energy they need by means of photosynthesis with the help of the microscopic algae their skeletons give home to, but they also supplement their diet by direct-feeding on the planktons and other food particles they capture from the water. The tentacles are extended by the polyps not only during the night, but during the day as well. This requires enhanced safety measures, therefore the tentacles used for feeding are equipped with stinging cells used not only for obtaining food, but also for self-preservation.

Some hump corals differ significantly from other coral species in terms of reproduction: they have male and female colonies that form separately. Unlike other corals, they release the sperm in the water, not the egg, and the females have a special cavity in their body which they use for brooding their larvae. Fertilization happens internally, after the sperm released by the male colony reaches the female colony through the water.

Some species belonging to the genus may proliferate using an asexual technique called budding as well.

These corals provide shelter and habitat not only for the microscopic algae they live in such a close symbiotic relationship. Numerous other animal and plant species find home among the irregular branches of hump coral colonies – such as sea fans and smaller fish.

Hump corals are vulnerable in front of all the environmental problems that threaten coral reefs in general, such as mechanical damage, acidification, sedimentation and rises in sea temperature, but many of the species belonging to the genus are still classified as Least Threatened or Near Threatened for the reason that they are very adaptable and resilient. For the time being, a great many Porites colonies seems to be stable and not presenting any sign of bleaching.